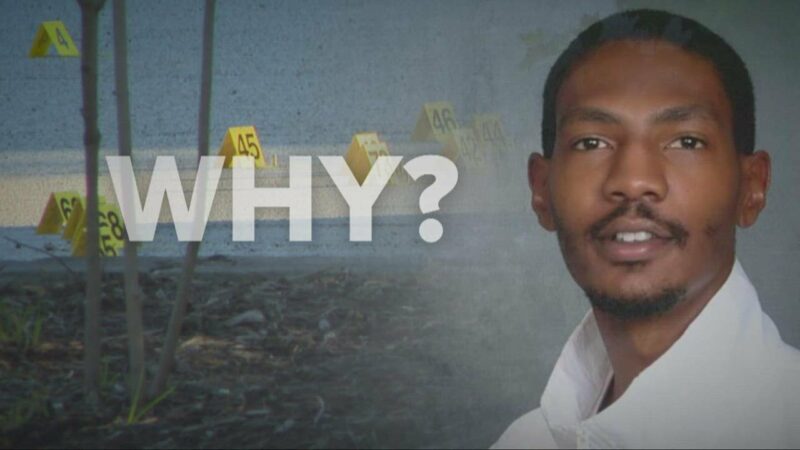 Police say there appeared to have been a shot fired from a vehicle they were pursuing and when the pursuit turned to a foot chase they believed the suspect was about to fire on them when they shot him no less than 60 times.

The mayor described the newly released police video of the shooting of  Jayland Walder, 25, as “heartbreaking” while also pleading for peace and patience from the community during the state investigation into the incident.

Chief Steve Mylett said officers attempted to stop Walker’s car early Monday for unspecified traffic violations, but less than a minute into pursuit the sound of a shot was heard from the car.

Mylett said that changed the nature of the case from “a routine traffic stop to now a public safety issue.”

Police said a few minutes later the car slowed and Walker jumped from the vehicle wearing a ski mask and ran.

A handgun, a loaded magazine, and a wedding ring were found on the car seat and a casing matching the gun was later found at the point where officers believed a shot came from the vehicle.

Officers unsuccessfully attempted to use stun guns as the chase continued to a parking lot, where a barrage of gunfire can be heard.

Mylett said he watched the video dozens of times and Walker’s actions are hard to distinguish, but a still photo seems to show him “going down to his waist area” and another appears to show him turning towards an officer and a third picture “captures a forward motion of his arm.”

After the shooting, the officers involved were separated and watched the video as investigators walked them through the scene, Myett said.

“Each officer independent of each other related that they felt that Mr. Walker had turned and was motioning and moving into a firing position,” he said.

Mylett said an officer firing at someone has to be “ready to explain why they did what they did, they need to be able to articulate what specific threats they were facing … and they need to be held to account.”

Mylett said all of the officers are “fully cooperating” with the investigation.

Officers provided aid, and one can be heard saying he still had a pulse, but he was pronounced dead at the scene, Mylett said.

Ohio Attorney General Dave Yost vowed a “complete, fair and expert investigation” and cautioned that “body-worn camera footage is just one view of the whole picture – before drawing conclusions, the full review must take place.”

The officers involved in the shooting have been placed on paid administrative leave.

“How it got to this with a pursuit is beyond me,” the family’s attorney Bobby DiCello said, adding that Walker’s family doesn’t know why he fled from police. Walker was grieving the recent death of his fiancee, he added.

“He was sad, but he was getting through it,” DiCello said.

They should be done running.