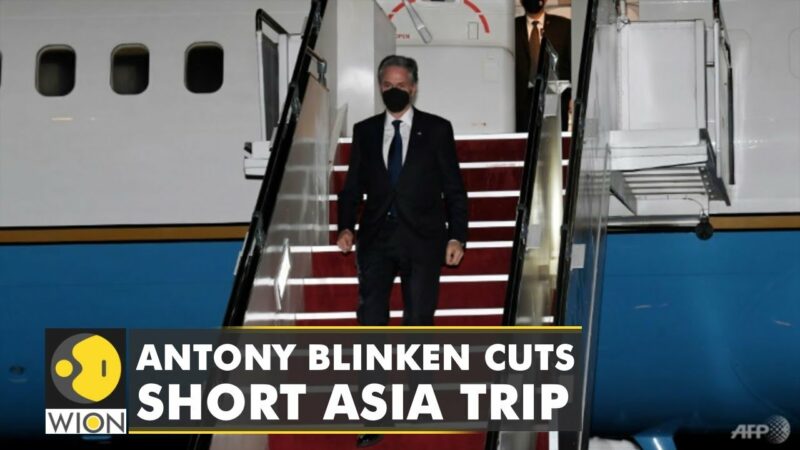 Secretary of State Antony Blinken’s plane was welcomed by people wearing hazmat suits after he cut his Asia trip short on Wednesday when a member of the press corps tested positive for COVID-19.

Blinken had visited the U.K., Indonesia, and Malaysia but did not make it to Thailand due to possible COVID-19 exposure. Blinken and his staff have routinely tested negative, even as recently as Tuesday, but cut the trip short “out of an abundance of caution,” according to a State Department spokesperson.

“We learned this morning, through our routine PCR testing, that a member of our traveling press pool tested positive for COVID-19 upon arrival in Kuala Lumpur,” State Department spokesman Ned Price said in a statement.  “The individual who tested positive will remain in isolation, and we will continue to adhere to and go beyond CDC [Centers for Disease Control and Prevention] guidance, including with our rigorous testing protocol, for the remaining traveling party.”

Blinken spoke with the foreign minister of Thailand about the decision to cut the trip short and “expressed his deep regret.

John Hudson, one of the press corps members traveling with Blinken, tweeted on Wednesday that “these are the type of people who start approaching your plane after someone tests positive for corona in the secretary’s entourage.

Blinken’s trip to Southeast Asia was targeted at strengthening relations in parts of the world where China has become more involved. The decision to cut the trip comes at the same time as a surge in the Omicron variant around the world.
Subscribe
Login
1 Comment
Oldest
Newest Most Voted
Inline Feedbacks
View all comments

“I don’t want to accuse the Asians of responsibility for the virus.” Blinken says, winkin’ and noddin’.