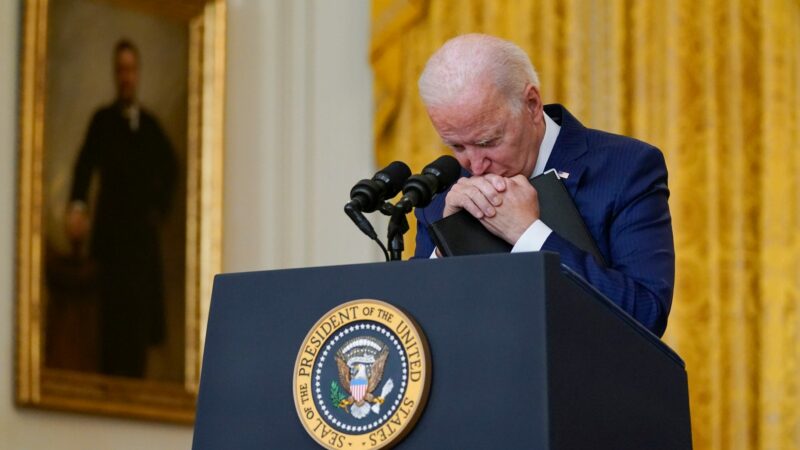 “Another little bit of news for all of you, and we’ll have more in the week ahead, I expect, in the coming days,” Psaki announced. “But next Wednesday, the president will hold a formal press conference at 4:00 p.m. in the afternoon. So we’ll look forward to seeing you there and to the press and looks forward to speaking directly to the American people.”

Psaki faced an impatient gaggle of reporters in the press room after allotting time for FEMA Administrator Deanne Criswell to speak on developing cooperation between states and the National Guard to manage healthcare resources and labor.

One reporter, having missed the brief announcement at the beginning, asked Psaki about future presidential press conferences.

“We’ve just caught you,” Psaki joked from the podium. “I now relate to your teachers in high school and what they may have experienced, but it’s OK. But, yeah, there you go. To be fair – it is a Friday in a very busy news week.”

The Friday conference came after several Democratic Party policy losses both in the legislature and Supreme Court.

“Right now we’re dealing with the realities of the fact that we have a very slim majority in the Senate and in the House that makes things more challenging than they have been in the past,” Psaki told reporters after being questioned on the administration’s recent series of setbacks.

She continued, “I would also note, and I bet a lot of Americans who have conveyed their advocacy for a lot of those issues, issues the president cares deeply about, have also cared deeply about getting the pandemic under control.”

The White House took two big hits this year on Thursday – one at the hands of two Democratic senators and another from the Supreme Court.

Just a couple of hours later, the next batch of bad news came for the Biden administration when the Supreme Court blocked the president’s vaccine mandate for private employers with one hundred or more employees.

Both losses happening within a few hours of each other came as the White House was already reeling to start the new year.

The president’s approval rating stands at just 33% and disapproval at 53% among Americans in a Quinnipiac University national poll conducted Jan. 7-10 and released Wednesday.

According to the Quinnipiac poll, the president is underwater on his handling of three top issues, the economy (34%), foreign policy (35%), and the coronavirus pandemic (39%).

Joe can brag about being the biggest loser on the planet. That would be the first time he told the truth!

Let’s see what phony excuse Psucki comes up with to cancel it.