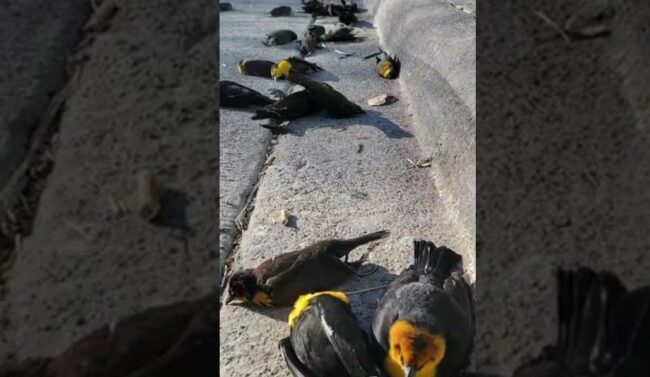 Bad Omen – Hundreds Of Birds Plummet To The Ground Mid-flight

Hundreds of migratory birds from Canada literally fell from the sky in Chihuahua, Mexico Sunday with at least 100 of them dead.

The flock of yellow-headed blackbirds darkened the sky then fell like rocks upon a Chihuahua neighborhood street. The phenomenon was captured in some pretty disturbing footage where you can see some of the birds are stunned but continue flying in different directions while some lay dead on the ground.

Several theories have been put forth about the cause of the birds’ sudden descent or death. One veterinarian suggested that inhalation of toxic fumes, possibly from a heater, caused the bizarre incident.  Another theory suggested was that the birds may have been electrocuted while sitting on a power line.

Richard Broughton, an ecologist at the UK Centre for Ecology & Hydrology, said that a predatory bird, such as a raptor, was likely the cause. Raptors chase flocks of birds, causing them to fly tightly together before potentially crashing into the ground, he explained.

An ornithologist suggested that the bird deaths may have been caused by high levels of air pollutants. There have been several incidents of large numbers of migratory birds dropping dead in New Mexico.