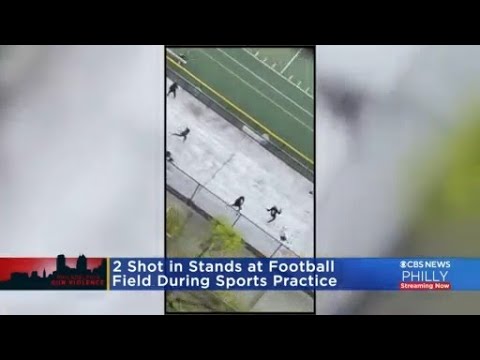 A Philadelphia youth football coach shot a rival coach in the stands Friday where young children were practicing.

Video footage captured two men arguing before the group began to scatter. The gunman began walking away but then turned around and opened fire, striking one of the men he had been arguing with and another individual who was in the stands. A group of seven-year-olds was practicing as the incident unfolded.

The video shows the chaos as everyone scattered when the shots were fired.

The shooter and one of the victims had been arguing over a woman just prior to the shooting, according to the police report. Police identified the gunman as the coach for the Blackhawks youth football team. One of the victims was the coach of a rival team.  Other individuals involved in the incident are refusing to cooperate with authorities.

“It’s extremely disturbing,” Philadelphia District Attorney Larry Krasner said, noting the shooting could have a lasting impact on the children who witnessed it.

“The effect is that people are desensitized to it. It seems normal that there are gunshots going on and that is not how our youth should be living,” Krasner continued. “It is not how they should be growing up.”