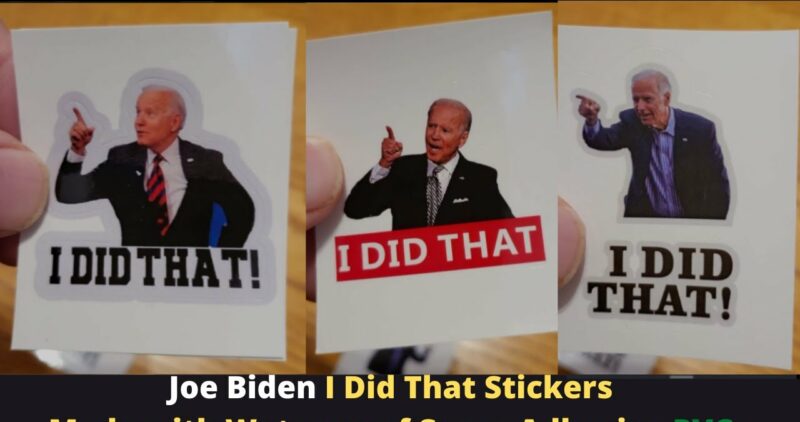 Motorists across America are calling it as they see it at the pumps, and clearly, the consensus is the buck stops with President Biden.

Decals of a finger-pointing Biden, with the words “I did that!” in big, bold print, have been showing up on fuel pumps across the country as gasoline prices continue to skyrocket.

With the average price of a gallon of gas reaching $4.326—the stickers of Biden are popping up at pumps everywhere.

“I take off five or six a day from our different pumps,” Perry Cagle, assistant manager of an Exxon station near Athens, Alabama said.

The stickers have been spotted on a pump at a Speedway in the Mott Haven neighborhood of New York. They have also been found at a Shell pump in Harlem. They sell in packs of 100 for $7.98 on Amazon.

“I just know everything he’s been doing since he took office has been going downhill. Bring Trump back,” New York City resident Harold Frost, said. “My car has been parked the whole week because of this. I took the train, but it’s dangerous now on the train. You gotta be careful.”

that he’s benefiting from the gas prices and fills about 80 sticker orders a day.

“I don’t go for the Democrats. They make it seem like they got the backs of minority people, but in reality, they’re just in it for themselves,” said Vincent Williams, 29 a black Harlem resident who said he could only afford to put $15. “The rise in gas prices is B.S.”

Put an America last buffoon in the WH, and this is what you get.