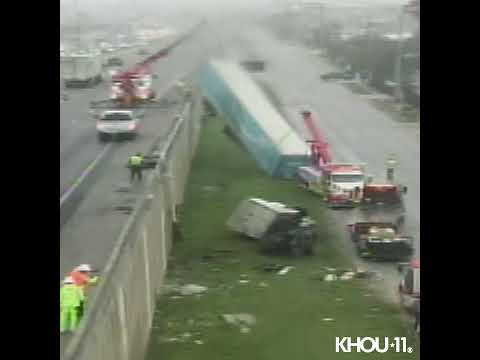 Video from traffic cameras shows an 18-wheeled Amazon trailer dangling off Interstate 35 in northeast San Antonio, Texas.
San Antonio police say the 42-year-old male driver who was not injured, told them someone cut him off as he headed south on I-35 near Weidner Road around 6:30 a.m. Thursday.

The driver told authorities that he veered off the road while trying to avoid other vehicles.

The trailer broke free of the cab, skidded along the concrete wall, and came to a stop with part of it dangling from the elevated roadway.

The delivery truck was empty at the time of the accident. The dangling trailer caused damage to the sidewall of the highway.

The San Antonio Fire Department spokesperson said that there were no injuries or other car accidents related to the incident.

There have been a number of highway accidents involving truck crashes recently. Earlier this month, a video that circulated on social media showed a car’s front end pinned under a large semi-truck as it was dragged along an Illinois highway.

The front half of the car was pinned between the road and the truck’s body. Amazingly the driver of the car was uninjured and stuck their hand out and waved.

The Illinois State Police Department said that the car’s driver was changing lanes before the vehicle was stuck under the truck.

Similarly, a semi-truck in November rolled on top of a car traveling in front of it. A woman was driving the car across a bridge in Washington State and slowed down when the car in front of her also slowed, however the truck driver behind her did not stop in time and crushed her car.

The woman was uninjured but suffered some pain in her ribcage and head. She climbed out of the car after the truck was lifted by a tow truck. .

A lot of the time, it’s a trucker avoiding a car making stupid moves!

I guess that now the evil, lying, corrupt, pond sucking scum dems will ban trucks from driving on freeways