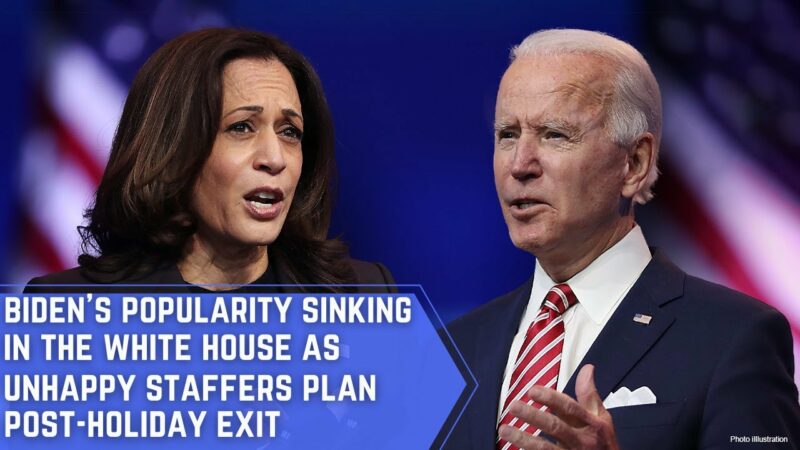 White House staffers are feeling a little blue in President Biden’s White House as his first year in office comes to a close and polls show his popularity has taken a nosedive among the majority of Americans.

Staffers are so unhappy with their jobs that they anonymously leaked their dissatisfaction online in hopes that senior staffers would be alerted to the lack of comradery and overall happiness in the workplace.

“A lot of the natural coordination that happens in a typically functioning White House has been lost, and there has been no proactive effort to make up for it through intentional team building,” one White House official said.

Staffers say they have struggled with virtual events and some staffers have said that those who are “outsiders” to Biden’s inside circle and network are often left out.

Staffers also contend that they have been left out of some events while other staffers from the capital are invited in their place because of a “lottery system” used to decide who comes to certain gatherings.

“It’s also hypocritical and ironic that a president whose brand is built on empathy and family has staff policies that fly in the face of that brand,” one staffer said. “It’s not a good look, and it’s emblematic of how this place runs.”

Many of the staffers report that they are currently updating their resumes and will begin looking for new jobs once the president officially hits his one-year anniversary in office.

The unrest in the White House comes as Biden and Harris continue to be dogged by low polling numbers as Americans contend with record inflation, soaring gas prices, supply chain issues, the omicron variant of the coronavirus, the ongoing border crisis, and rising international tensions with Russia and China.

The president’s rating is at 43% approval and 51% disapproval in an NPR/Marist national survey released earlier this month and a separate national poll from Monmouth University indicated a 40% approval and a 50% disapproval. Some polls show Biden’s approval rating even lower.

Harris’ numbers are even worse according to polling last month that showed her with a 28% approval rating.