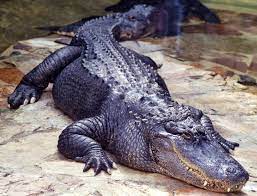 The sheriff’s office posted on Facebook that they’d received a call about an American alligator sighting.

The call was surprising considering that Midland County is in the Texas desert, more than 400 miles from the coast. An individual discovered the alligator under their car at a mobile home and RV park.

“Deputy Rodriguez responded and the Alligator was safely ‘taken into custody,'” the sheriff’s office posted on Facebook, adding that the gator was a “rare sight.”

The post also included photos of officials placing the gator into a large carrier. According to the Midland County Sheriff’s Office, the local game warden took the animal to a veterinarian. It’s believed the alligator may be a loose pet.

“We’re hoping a possible owner calls to claim our friend that’s obviously lost in the desert,” the sheriff’s office added.

The Midland County Sheriff’s Office added a little levity to their post with a joke about the animal’s employability.

“Alligators ask lots of questions, they’d make great interri-gators. Their teeth are pretty intimidating if you ask us. However, we don’t think this guy will be joining the MCSO staff anytime soon,” the office wrote.