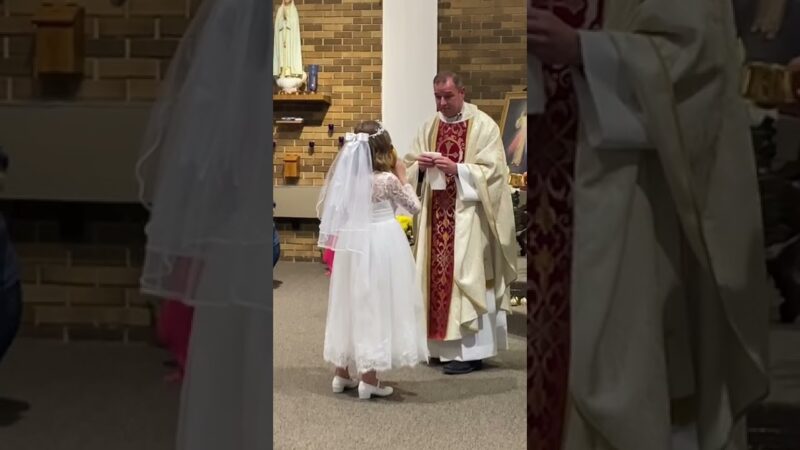 Video from a religious ceremony in Brandon, South Dakota, has gone viral after a 7-year-old girl chugged the wine she was offered at her first communion.

Brynley Heidebrink’s sip of the communion wine was less of a sip and more like a gulp. In fact, the priest had to pull the cup from her little hands.

Brynley had even practiced for the spiritual event, asking her mother specifically about the wine, Stefanie said.

“We had a retreat that morning to practice and she even asked again right before she went up there and I told her to just let it touch your lips; you don’t even have to take a sip.”

Little Brynely said later she couldn’t explain why she chugged the wine, other than, “I don’t know (why),’” according to Stephanie, who added her daughter didn’t even like the taste.

In any case, Stefanie was tickled by the incident. She thought her family would be amused as well, so she shared the footage on social media.

“After I posted, I had a lot of friends and family text me saying that they can’t stop watching and laughing,” Stefanie said.

Millions of other TikTok users agreed as the video has been viewed more than 27 million times.

Stefanie said her daughter is unaware of her viral fame and she is happy to leave it that way, and let Brynley focus on her other passions: dance and gymnastics.

“She’s always been my little diva, so this is just fitting that she is going viral for something like this,” Stefanie said.

you are a sick parent, did she get drunk when she chugged the wine? that priest or whatever should have taken that cup from her in an instant, instead of letting her keep chugging