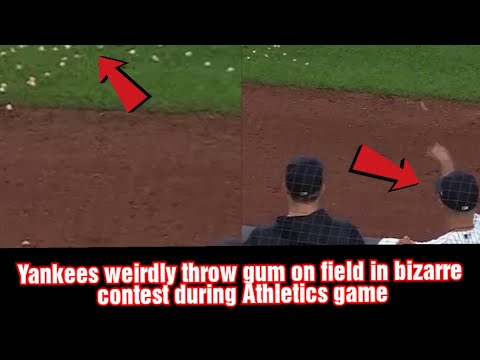 The New York Yankees must have been bored in the dugout Tuesday night because they made up a game of their own to pass the time.

Hosting the Athletics for a three-game set at Yankee Stadium, players were caught on camera playing a game of chewed gum toss.

Yankees players appeared to be tossing their used gum at a sprinkler head in the grass.

Many fans express compassion for the poor grounds crew worker who will have to clean it up.

“I’m actually not a huge fan of baseball players making the grounds crew clean up bubble gum off the field,” one unhappy fan said.

“I hope they’re gonna clean that up cause like???? The grounds crew is gonna have to clean that up,” commented another fan.

One fan suggested the grounds crew deserved a little extra money for cleaning the gross mess.  “grounds crew better get a fifty dollar PER piece picked out of the grass later” the fan insisted.