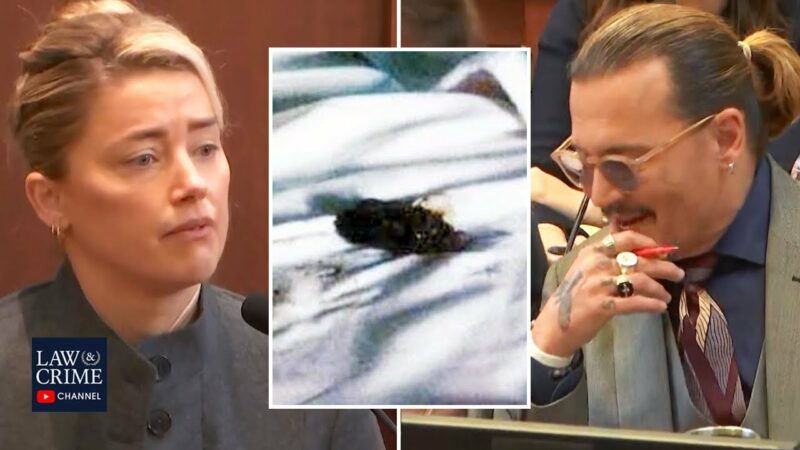 Amber Heard Testifies — The Dog Did It

When Amber Heard took the stand Monday she vehemently denied defecating on Johnny Depp’s side of the bed.

Heard testified the Yorkie had eaten Depp’s marijuana stash as a puppy and had been dealing with bowel control issues ever since.
After a weeklong break, Heard resumed testimony in Depp’s defamation trial against her in Fairfax County, Va., answering questions about the “poop” incident. Depp previously testified that he believed Heard defecated on his side of the bed and then blamed their dogs, Pistol and Boo — after an argument during her 30th birthday party in April 2016.

Heard pushed back against the claims, citing the bowel control issues their teacup Yorkies has. She claimed that as a puppy, the Yorkie ate Depp’s stash of marijuana, leading to uncontrollable bowel movements. “[Boo] had eaten Johnny’s weed when she was a puppy and had bowel control issues for her entire life,” she testified.

During testimony centered on Depp’s alleged abuse, Heard said she left their two dogs on the bed while she packed for the Coachella Music Festival and did not notice one of them had an accident.

Depp recalled the “grotesque” moment that his security guard, Sean Bett, sent him a picture of the feces during his own testimony. He wanted out of the marriage and had asked to retrieve his belongings at their shared residence while Heard was at Coachella, he testified, but Bett advised that it wasn’t a good time to swing by.

“He showed me a photograph on his telephone of… it was a photograph of our bed, and on my side of the bed, was human fecal matter,” Depp said. “My initial response to that was, I mean… I laughed. It was so outside. It was so bizarre and so grotesque that I could only laugh. So I did not go down there that day.”

Depp testified that he later approached Heard about divorce and brought up the feces. Heard blamed the dog, but Depp didn’t buy it. “They’re teacup Yorkies,” he said. “They weigh about 4 pounds each. The photograph that I saw — I lived with those dogs for many years. It was not the dogs… I didn’t feel like I deserved that kind of treatment.”