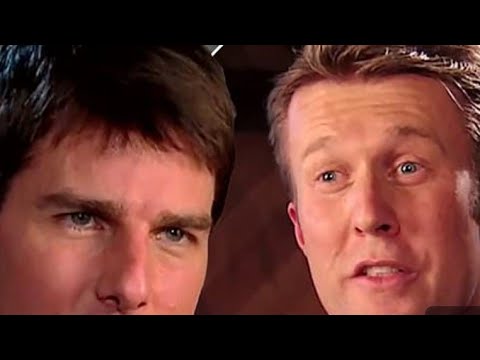 A Tom Cruise interview has resurfaced and gone viral for a second time after the Top Gun star again reminded a journalist to “put your manners back in.”

Viewers described the clip as ‘terrifying’ after the actor stared down 60 Minutes reporter Peter Overton.

The 2005 interview took place four years after his divorce from actress Nicole Kidman. The 17-year-old interview has been viewed over 2.1 million times online, with the numbers climbing since the clip was reshared by a Twitter user.

Tom reluctantly answered a few questions about his ex-wife, but when Peter continually pushed him on whether Nicole was the ‘love of his life,’ Cruise had had enough.

The ‘Risky Business’ star asked his interviewer,  ‘What do you mean, Peter? How do you answer that question?’

When Overton continued to press the actor on his past relationship, he became increasingly agitated.

He stated that he still had a good relationship with Nicole, and wanted her to be ‘happy’ and marry again, but things got tense when he told Peter he was ‘overstepping the line.’

Tom stared at the interviewer with piercing eyes, who defended himself by saying: ‘I suppose they’re questions that people want to know.’

‘So, I’m just telling you right now, ok, just put your manners back in.’

Peter apologized if Tom thought he had overstepped the mark, but the tension was heavy, and social media users agree they would not want to be on the receiving end of one of Tom’s stares.

‘No one like him, terrifying guy,’ one person tweeted.

Another said: ‘Did anyone hear from Peter ever again or did he just melt into a puddle after this?’

But many fans agreed that Tom was right to ‘lay down the law’ and ‘set boundaries’ when personal questions were asked.

One person replied: ‘…okay? He was polite in not wanting to answer a personal question, set boundaries, and didn’t take it personally in the end. How is that weird in any way? I feel like everyone on here looks at everything he does through a skewed lens”.

Tom and Nicole met on set for Days of Thunder in the 1990s and tied the knot the same year.

The pair adopted two children together – Connor and Isabella – before splitting after 11 years of marriage.

Now, Nicole is married to country musician Keith Urban and has been for 15 years.

As for Tom, he was married to Katie Holmes from 2006 until 2012 following his marriage to Nicole. The two share a biological daughter, named Suri.

As for his career, Tom recently returned to the Top Gun franchise for Top Gun: Maverick, in which he reprised his role as Peter ‘Maverick’ Mitchell after 36 years.