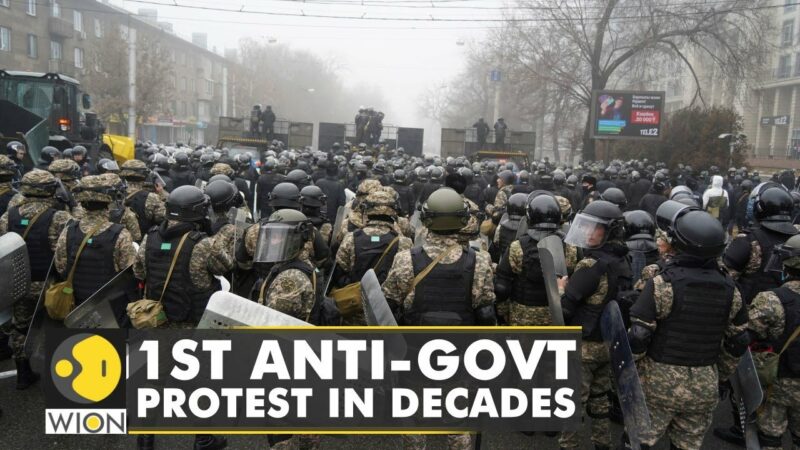 Dozens of protesters and 12 police officers are dead after an eruption of violence that saw demonstrators storm government buildings in Kazakhstan and set them on fire, authorities said Thursday.

One police officer was found beheaded in the violent attack.

Even in the face of severe response by authorities, protesters took to the streets again Thursday in the country’s largest city, Almaty, one day after breaking into the presidential residence and the mayor’s office there.

In the unrest on Wednesday, “dozens of attackers were liquidated,” police spokeswoman Saltanat Azirbek said. Twelve police officers were killed and 353 injured. The Interior Ministry said 2,000 people were arrested.

Tens of thousands of people, some reported to be carrying clubs and shields, have taken to the streets in the worst protests the country has seen since gaining independence from the Soviet Union three decades ago.

The demonstrations began after a near-doubling of gasoline prices but seemed to reflect underlying discontent in the country as well.

The government announced a 180-day price cap on vehicle fuel and a moratorium on utility rate increases on Thursday as a concession.

President Kassym-Jomart Tokayev has gone back and forth between trying to pacify the protesters, and threatening harsh measures to extinguish the unrest, which he blamed on “terrorist bands.”

Major interruptions to the internet and cellphone service made it difficult and sometimes impossible to get news about what was happening inside Kazakhstan. The airports in Almaty and one other city were completely shut down.

Concerns that a broader crackdown could be brewing grew after Tokayev called on a Russia-led military alliance for help.

The alliance, the Collective Security Treaty Organization, includes the former Soviet republics of Kazakhstan, Belarus, Armenia, Tajikistan, and Kyrgyzstan. The operation is its first military action, an indication that Kazakhstan’s neighbors, particularly Russia, are concerned that the unrest could spread.

The CSTO’s general secretary, Stanislav Zas, said that the full contingent to be sent as peacekeepers would number about 2,500.

He rejected as “complete stupidity” suggestions that the troops would act as anything other than peacekeepers. “The sincere wish of our states is real help for Kazakhstan in the difficult situation,” he said.

Meanwhile, White House press secretary Jen Psaki said the U.S. has “questions about the nature of this request and whether it was a legitimate invitation or not.”

“The world will, of course, be watching for any violation of human rights and actions that may lay the predicate for the seizure of Kazakh institutions,” she said.

U.N. spokesman Stephane Dujarric called on security forces from within and without to “show restraint and protect people’s rights.”

Tokayev has imposed a nationwide state of emergency and banned religious services. That is a blow to Kazakhstan’s sizable Orthodox Christian population, which observes Christmas on Friday.

Coming soon to a country near you.