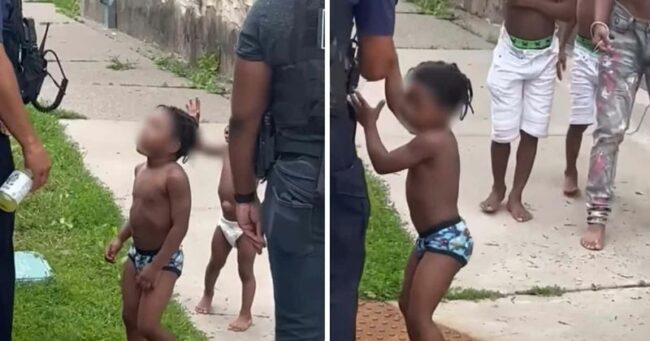 Distressing footage has surfaced online that shows a group of young children kicking, hitting, and swearing at police in St Paul, Minnesota when the officers arrived at a home to serve a search warrant while looking for a murder suspect. The video shows children in their underpants with some wearing diapers, hitting, punching, and cursing at officers.

“F*** off b****!” one child screams several times before slapping the officer. Bystanders can be heard provoking the children, and calling a black officer “Oreo head”.

Author of “Grooming Children For A Life Of Crime,” Sheila Qualls commented on the incident, “Children who can’t read or cross the street unattended hurled profanities and unabashed disrespect at law enforcement officers.”

“They cussed, berated, and struck police officers with their fists. This video is disgraceful. Heartbreaking. It is unsettling to law enforcement officers who encounter this behavior daily. It should be frightening to all of us. It should be embarrassing to leaders who have failed to lead a community toward virtue and morality,” Qualls wrote. “We can do better, and we must. Let’s stop playing politics with our children’s lives. I do not believe this is what civil rights leaders wanted for the future of the black community. These children and our country deserve better.”

The YouTube video has received a great deal of feedback, with some users blaming the children’s behavior on bad parenting. Many expressed their concerns that the children may grow up to be criminals. “Parents who raise their children to act like this should themselves be arrested for abusive parenting. You can already see where this child is heading, and it isn’t good,” one user wrote. Another user said, “Yep, when those kids get older the only sentence they’re gonna hear is “Will the defendants please rise”. “Everyone seems so concerned about these kids’ future. I’m actually terrified about the future of the innocent victims who will be forced to suffer at the hands of these types when they enter adulthood in overwhelming numbers in a society that ignores, denies, promotes, rewards, and even celebrates their terrorism,” one user said.