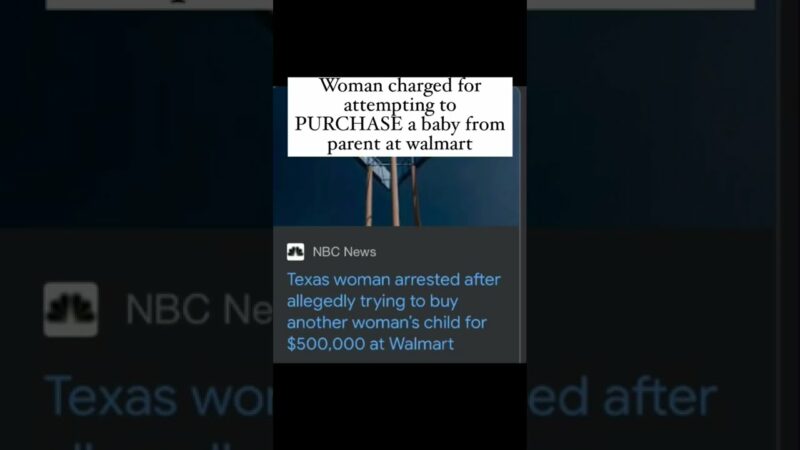 Texas Woman Arrested After Trying To A Baby At Walmart

A Texas woman was arrested after a shocking encounter with another shopper inside a Walmart store where she was accused of offering $500,000 to buy the woman’s baby.

Rebecca Lanette Taylor, 49, was charged with the sale or purchase of a child and was released from the Houston County Sheriff’s Office on a $50,000 bond.

The incident occurred at a Walmart in Crockett, Texas, near Houston. The two women were both in the self-checkout line last week when Taylor commented to the mother about her 1-year-old son’s blonde hair and blue eyes then asked how much the baby cost, according to the police report.
According to the mother’s affidavit, she initially laughed off the comment, but the woman told her that she had $250,000 in her car. The mother also said that at one point there had been another woman was with Taylor. The mother said she alerted authorities and waited for the two women to leave the store.

However, when the mother got to the parking lot, Taylor approached her again and yelled that if $250,000 wasn’t enough, then she would pay $500,000 “because she wanted him and she was going to take him.”

At that point, Taylor was standing behind a black SUV that was parked next to the mother’s vehicle.

Even after the mother locked her children in the car, Taylor kept pushing.

Eventually, Taylor jumped into the SUV and drove off.

Lt. Ahleea Price with the Crockett Police Department obtained a warrant for Taylor’s arrest and took her into custody on Jan. 18.
Police said they watched the video from the scene and it confirmed the mother’s claim.
Subscribe
Login
0 Comments
Inline Feedbacks
View all comments
Previous Post
Next Post