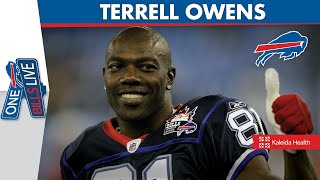 Terrell Owens got into a fevered exchange with a neighbor Wednesday night.

The former Eagles star posted an Instagram video late Wednesday night of an argument unfolding with a woman over his driving in his Florida neighborhood.

The unidentified woman claimed that after the retired NFL legend nearly hit her, he got out of his car to harass her.

“You didn’t have to get out of your f**king car … You’re a black man approaching a white woman,” the unidentified woman could be heard shouting as police attempted to defuse the situation.

However, when speaking to the woman he identified as a “Karen” and the police, Owens maintained he hadn’t done anything wrong and only responded to her hostilities.

“This is real. This is real. I’ve seen it, but I’ve never been a part of it. This is real life. Now, she’s crying. Her husband told her to go inside the house, but no, she wanted to do the whole Karen thing,” Owens told his viewers.

“Before [the police] got here, it was, “F**k you this, F**k you that.” … It was all of that. The police showed up, the tears start flowing,” Owens claimed in the video.

No arrests were made and ultimately, everyone went their separate ways.