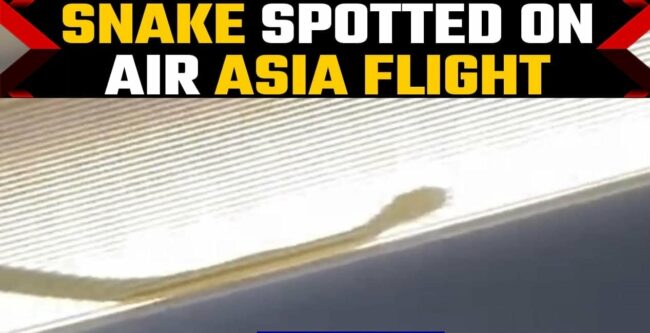 An AirAsia flight had to be rerouted Thursday after a snake was spotted slithering through the plane’s lights.

Snake on a plane! AirAsia flight to Tawau diverted to Kuching pic.twitter.com/aqyOexym8b

The flight was traveling from Malaysia’s capital, Kuala Lumpur, to Tawau when the snake was discovered. A passenger aboard the plane captured a video of the snake’s outline moving in the overhead lights, which was later shared on social media.

As soon as the reptilian stowaway was discovered the flight was re-routed to the Malaysian city of Kuching. Upon arrival in Kuching, the plane was fumigated and the snake was removed before passengers re-boarded the plane to continue to Tawau.

“This is a very rare incident which can occur on any aircraft from time to time,” AirAsia’s chief safety officer, Capt. Liong Tien Ling said in a statement. “The Captain took the appropriate action and the flight safely departed for Tawau as soon as possible.”

“The safety and well-being of our guests and crew is always our top priority,” Ling added. “At no time was the safety of guests or crew at any risk.”

A caption on the TikTok video, which has over 2.6 million views, translates to “snake in plane.” Many comments on the video allude to the 2006 cult classic “Snakes on a Plane,” asking where the movie’s star, Samuel L. Jackson, was when they needed him.