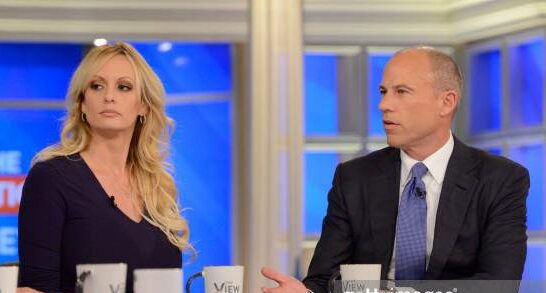 Disgraced attorney Michael Avenatti raked former client Stormy Daniels over the coals Friday when questioning her while defending himself at his own trial in a federal court in Manhattan.

Avenatti is facing allegations that he swindled the ex-porn star out of almost $300,000 in revenue from book sales. Avenatti formerly represented Daniels beginning in 2018. Daniels attempted to get out of a nondisclosure agreement and go public with the details of an affair she purportedly had with former President Donald Trump in 2006.

“On Sept. 27, 2019 … You stated that I was ‘f***ing myself pretty nice and hard and that when I go to prison, there will be a long line of people to ass-rape me,” Avenatti asked Daniels, who neither confirmed nor denied making the statement during the trial Friday.

Avenatti also confronted Daniels about a social media comment she had made about a specific sex lubricant he could use while in prison. “You suggested you could put Tabasco sauce in the lube and bring it to me in prison, so I could be anally raped,” Avenatti said.

Daniels did not deny making the statement.

Avenatti also grilled Daniels about statements she had made claiming that she has supernatural powers and the ability to speak to the dead. Daniels has said that she can read Tarot cards, as well as see through the walls of a house.

Daniels agreed with Avenatti’s statement that she believed herself to be a “medium,” someone who, in her own words, can communicate with “non-living” spirits.

Avenatti is facing charges that he had two installments of book payments meant for Daniels wired to a bank account that he controlled. Daniels and her legal counsel submitted text messages that show Daniels asked for the money on multiple occasions.

Avenatti claims he is innocent of the charges of wire fraud and aggravated identity theft. If convicted, he could face up to 22 years in prison.

Avenatti and Daniels first gained notoriety during the presidency of former President Donald Trump. Trump’s since disbarred attorney Michael Cohen had paid Daniels $130,000 in hush money to squelch rumors of an affair between Daniels and the then-president.

At that time, media personalities such as Joy Behar of ABC’s “The View” and MSNBC’s Stephanie Ruhle hailed Avenatti as a hero, with Behar even saying that Avenatti was, “the savior of the Republic.” Ana Navarro echoed Behar’s effusive praise, telling the now-disgraced lawyer, “You’re like the Holy Spirit.” Others, such as CNN’s Brian Stelter, had visions that Avenatti would run for president.

Avenatti has also been convicted of attempting to swindle Nike out of $25 million and has been sentenced to 2.5 years in prison.