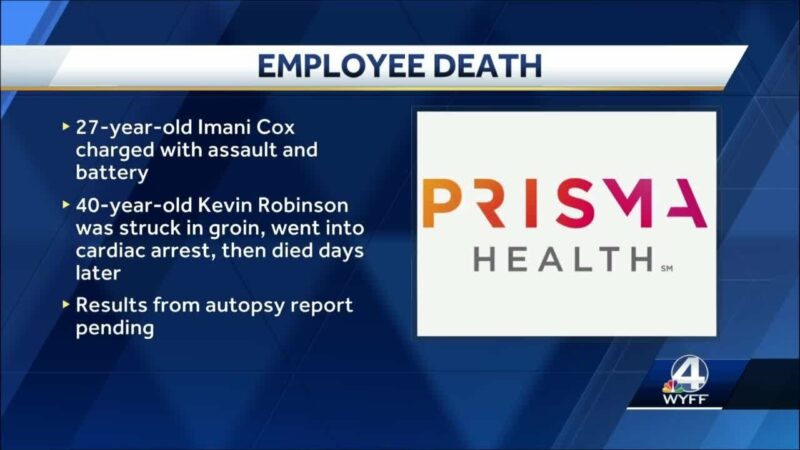 A Prisma Health employee has died following an incident involving a patient inside a South Carolina hospital.

Kevin Robinson, 40, got into an altercation with a mental health patient on May 27, at Tuomey Hospital in Sumpter, South Carolina. He died on May 31.

Robinson was kicked in the groin and later went into cardiac arrest. Robinson died days later in the ICU, according to Sumter County Coroner Robert Baker Jr.

Imani Cox, 27, was in the hospital being treated for “mental and emotional” issues when she attacked Robinson.

Police said Robinson had worked at the hospital as a mental health technician for more than a decade.

“He worked for us for 11 years and was well-loved by his team members,” the hospital said in a statement. “We extend our heartfelt condolences to our team member’s loved ones and to our Tuomey hospital family who share his loss.”

Cox was arrested and was charged with assault and battery-2nd degree and booked at the Sumter County Sheriff’s Office Detention Center, according to police. She is being held on a $7,500 bond.

“Tragically, we are seeing an increase in aggression and violence across the nation, in settings such as shopping malls, airplanes, schools, and healthcare facilities,” the hospital statement added. “Prisma Health has Security on hospital campuses and an active workplace violence task force that is examining how to balance compassionate care with protecting our team members, patients, and visitors.”

You have to know which ones to tie down.