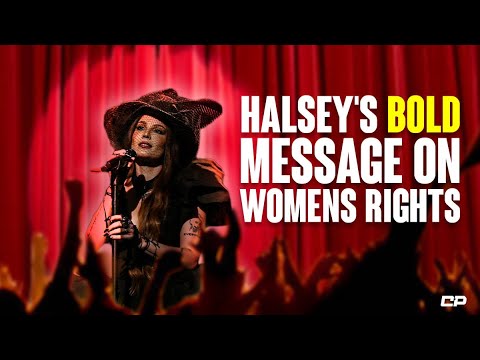 Halsey Tells Pro-Lifers To Get Out!

Concert goers in Arizona made a quick exit when Halsey told them to leave if they supported the overturning of Roe v. Wade.

Giving a passionate speech about the recent US Supreme Court ruling about abortion rights, Halsey, who wishes to be referred to as she/they, told a Phoenix crowd that their “heart breaks” seeing people who “deserve the right to healthcare” and the “right to choose.”

“If you’re mad in this audience right now, and you’re sharing statistics on Instagram and infographics and saying … ‘That’s really f–ked up,’ what you should do instead is you should be sharing stories about how you’ve benefited from abortion somehow,” they said in a video of Sunday’s show.

Halsey, 27, then implored attendees to “promise” to “put in the work” amid the Supreme Court’s decision to overturn the landmark ruling.

“Some of the people I’m looking at right now are going to need an abortion one day, and you deserve that,” they said.

“Whether it’s a life-threatening situation or it’s not, you deserve it. And here in Arizona, you guys gotta promise me that you’re gonna do that work so that the person to the left of you and to the right of you has that right for the rest of their lives.”

One fan later tweeted, “THE AMOUNT OF PEOPLE WHO JUST WALKED OUT OF THE HALSEY CONCERT AFTER NIGHTMARE WHEN SHE SPOKE ABOUT ABORTION WAS SICKENING. FIGHT FOR WHAT IS RIGHT. #AbortionRightsAreHumanRights #MYBODYMYCHOICE #halsey @halsey.”

Halsey noticed the tweet, and responded, “downside of doing outdoor venues: no door to hit them on the way out.”

On Wednesday morning they tweeted, “Honored to have my audience. Proud they cultivate a space where emotion and action meet. Love doing what I do. And expect me to always tell the truth when I get up there. Show must go on.”

Halsey also clapped back at people who said they paid to hear them sing, not hear their views.

“No, you paid to see me use a stage as a form of expression in the manner that I choose. Sorry you lack the critical thinking to realize that the rhetorical power of music doesn’t always serve your escapism,” they wrote.

Following the court’s decision last Friday, 13 states have “trigger laws” that call for the banning of abortion up to 30 days after the overturning of Roe v. Wade.

In Arizona, Gov. Doug Ducey signed an anti-abortion law in March that bans abortions after 15 weeks of pregnancy unless the mother’s life is in jeopardy. While it’s unclear when that law will take effect, AZ Central reported Friday that Planned Parenthood of Arizona halted all abortions, both medical and surgical. Seven of nine licensed providers in the state immediately stopped all abortions.