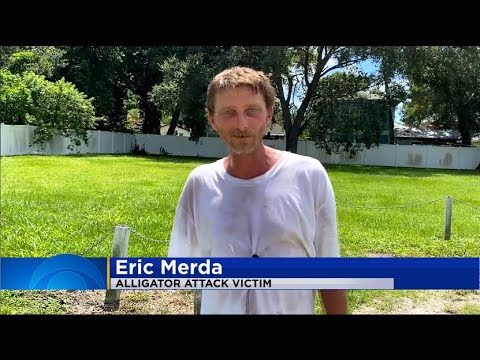 A Florida man is opening up about losing his arm in an alligator attack in Myakka City earlier this summer.

Eric Merda says he spent three terrifying days in the swamp after a gator bit his arm off while he was swimming in Lake Manatee.

There have been at least a half dozen gator attacks this season around the Tampa Bay area, most recently, was a 77-year-old woman over Labor Day weekend.

Merda is among those who lived to tell his story.

“Not the smartest decision a Florida boy could make,” Merda said.

Merda said on July 17, he got lost in the woods at the Lake Manatee Fish Camp in Myakka City. When he finally found the lake, he decided to swim across rather than walk around.

“I look over and there’s a gator on my right-hand side so I went to swim and she got my forearm so I grabbed her like this, she was trying to roll but she snapped her head so my arm went backward like this completely,” said Merda who continued to fight for his life.

“She’s already got my arm, so when we came up the third time, she finally did her death roll and took off with my arm,” he explained.

Merda said after that he swam back to where he started and began to walk, wander, and scream for help.

“Bones poking out, muscles, if I try to move my fingers, you could see it twitching,” said Merda.

He says he spent three days trying to find his way out of the swamp.

“I felt like I was walking in circles, I didn’t know,” he said. “So I followed the sun and power lines, stuff I could see.”

Finally, on day number three, he stumbled upon a fence with a man on the other side.

“I said a gator got my arm, he said, ‘holy smokes man!'” Merda recalled.

He was taken to Sarasota Memorial Hospital where surgeons amputated the majority of his right arm.

Merda says he’s adapting to a new normal and wants to warn others to be more cautious around Florida waters.

“Do not feed the gators and you guys know who you are, throwing rocks at them, I’ve seen it on the job sites, leave them gators alone,” Merda warns.