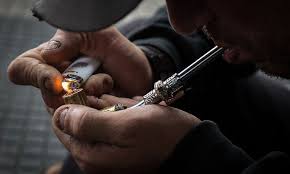 Eight organizations have been identified as having received PPP loans to distribute kits containing drug pipe components or a fully assembled smoking device. Those organizations received more than $5 million in PPP loans during the pandemic, with two of those organizations receiving more than $1 million each. The federal government distributed $800 billion in PPP loans during the pandemic, with the majority going to business owners, shareholders, creditors, and suppliers, according to Investopedia.

Seattle’s Downtown Emergency Service Center, a nonprofit organization that conducts outreach to the city’s homeless population, received $1,900,000 in PPP loans in 2021. The organization has distributed “three kinds of glass” to patrons, who can “get one kind of each pipe a week,” according to materials shared by the shelter.

The San Francisco AIDS Foundation which was founded in 1984, received $1,815,000 in PPP loans in 2020. The group distributes materials such as aluminum foil, pipe covers, and brillo that can be used to create pipes. It also participates in a pipe and syringe program at San Francisco General Hospital.

The data indicates an increasing acceptance of crack pipe distribution as part of a “harm reduction” drug policy, to provide users with paraphernalia and a place to consume drugs with the goal of decreasing communicable diseases and overdoses. Opponents of the plan argue that it subsidizes drug use, crime, and homelessness, and does nothing to help users and addicts live healthier lives. The harm reduction plan is most commonly associated with the distribution of Naloxone, which prevents opioid overdoses, as well as needle exchanges to prevent the spread of diseases like HIV and hepatitis.

Recently, public health officials have expanded programs to include injection sites, where drug users can be monitored in case of an overdose, and “safe smoking kits,” which include mouthpieces for crack pipes, and in some cases, the pipe itself.

The White House has denied that crack pipes would be included in smoking kits provided by nonprofit organizations that are eligible for a Department of Health and Human Services grant. Press secretary Jen Psaki claimed that the kits would include “alcohol swabs, lip balm, other materials to promote hygiene and reduce the transmission of diseases like HIV and hepatitis.”