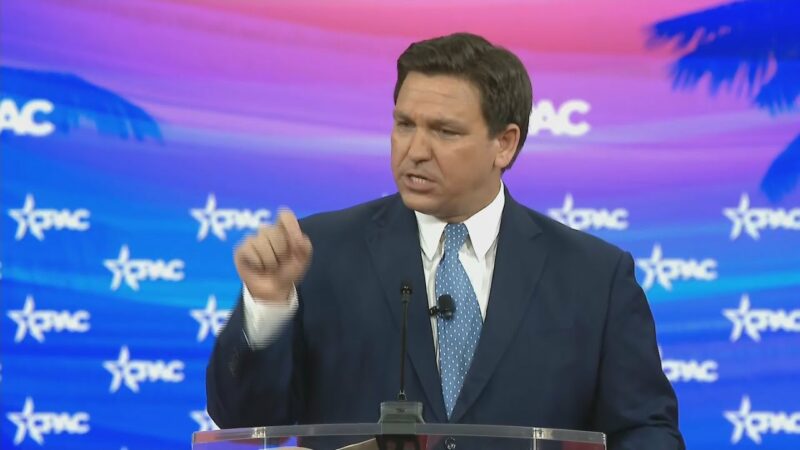 Republican Florida Gov. Ron DeSantis brought the cheering crowd to their feet at Thursday’s Conservative Political Action Conference (CPAC) when he said that he would send illegal immigrants to President Joe Biden’s home state of Delaware.

“Since I became governor, we banned sanctuary cities in the state of Florida,” DeSantis began. “And we are in the process of getting money from the state legislature so that if Biden is dumping illegal aliens into Florida from the southern border, I’m rerouting them to Delaware.”

The crowd roared in response.

“We will in D.C. and Hollywood as well,” the governor continued.

DeSantis made similar remarks at a Nov. 10 press conference after the Biden administration arranged for more than 70-night time flights into Jacksonville carrying illegal immigrants. Migrants, mostly Haitians, were seen at a Texas airport boarding planes and busses to Florida, New York, and Maryland under the supervision of law enforcement.

White House press secretary Jen Psaki has said that it “should be no surprise” that the administration is flying migrants to Florida and New York.

The governor issued an executive order in September to stop Florida agencies from assisting the administration in transporting illegal immigrants. He also announced his plan to sue the Biden administration over its “catch and release” program which allows immigrants to be released from the Department of Homeland Security (DHS) to await their pending court hearings.

The governor signed anti-sanctuary city legislation into law in June 2019 that prohibits cities from adopting “sanctuary” policies and requires local governments to cooperate with Immigration Customs and Enforcement (ICE) agents.

The City of Miami and activist groups including The Southern Poverty Law Center and the Florida Immigration Coalition sued DeSantis in July 2019 for banning sanctuary cities on the grounds of alleged racial profiling and decreased trust in law enforcement.

The rest should be dropped off at the WH.