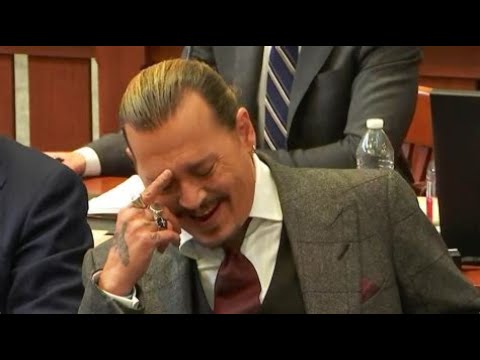 Johnny Depp’s penis was front and center in court Friday as he laughed and shook his head at the bizarre accusations during his defamation trial against Amber Heard.

Day 11 of the Depp-Heard trial saw laughter in the courtroom when Depp’s bodyguard, Malcolm Connolly, was questioned about an incident that supposedly occurred in the foyer of Depp’s home.

A lawyer asked Connolly, “And Mr. Depp was trying to urinate in the foyer, wasn’t he?” Connelly, looking confused, said, “No.” The lawyer continued, “Mr. Depp had his penis out, didn’t he?” and was immediately interrupted with an objection. Connolly stated, “I think I would’ve remembered seeing Mr. Depp’s penis.” Depp buried his head in his hands, shook his head, and could not contain his laughter.

The trial has seen many personal moments shared by Depp and Heard revealed in the courtroom over the past 11 days, but this one caused the courtroom to erupt in laughter. As the exchange about his penis continued, Depp’s expression shifted from one of shock to a chuckle, and eventually uncontained laughter as he buried his head in his hands.

At least so far the lawyer hasn’t asked about Depp’s size.