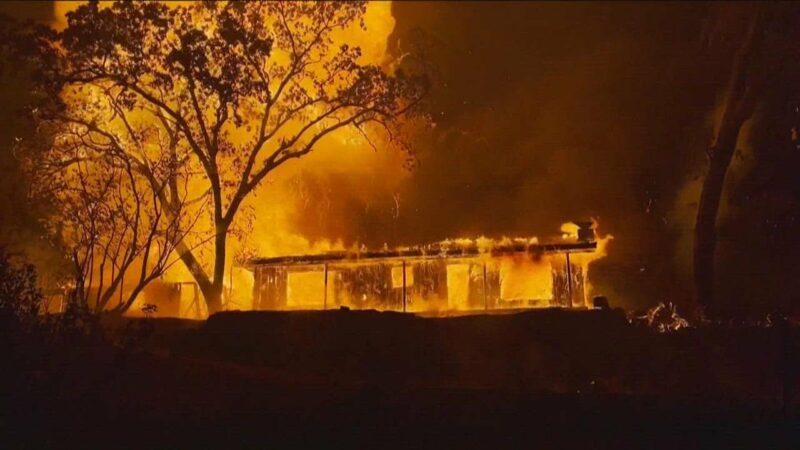 One of California’s biggest wildfires this year exploded to over 14,000 acres on Sunday, forcing thousands to evacuate as the blaze near Yosemite National Park is burning out of control.

The Oak Fire erupted Friday in Mariposa County, near the small town of Midpines. Meanwhile, 12 miles to the east firefighters made progress against the Washburn Fire near Yosemite that threatened the iconic sequoia grove.

The Washburn Fire is 80% contained after two weeks of firefighting, but the Oak Fire remains 0% contained as of Sunday afternoon, according to Cal Fire.

As of Sunday afternoon, the inferno had destroyed 10 residential and commercial structures and damaged five, according to Cal Fire. Pacific Gas & Electric said more than 3,100 homes and businesses in the area had lost power, with no indication when it would be restored.

California Gov. Gavin Newsom proclaimed a state of emergency for Mariposa County due to the fire, and over 6,000 people in the remote Sierra Nevada foothills were evacuated. A handful of residents defied the orders and stayed behind, said Adrienne Freeman with the U.S. Forest Service.

“We urge people to evacuate when told,” Freeman said. “This fire is moving very fast.”

The cause of the fire is under investigation, Cal Fire said.

California has experienced increasingly larger and deadlier wildfires in recent years with climate change warming and drying the western U.S. over the past three decades. Wildfires will likely become even more unpredictable, frequent, and destructive, scientists have warned.