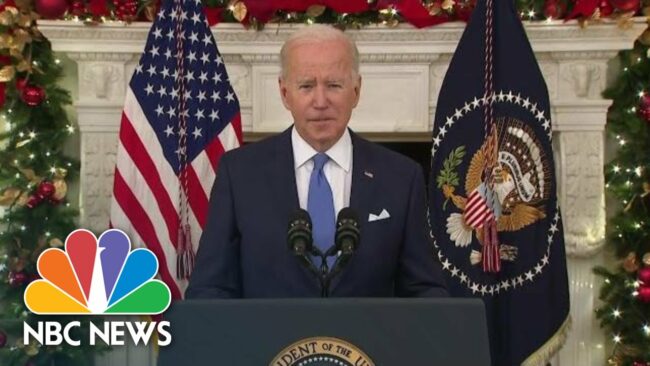 Top Republicans slammed President Biden’s failure to prepare for both the Taliban’s expedient takeover of Afghanistan as well as the new COVID-19 variant omicron spreading like wildfire, saying it demonstrates fatal mistakes made by the administration.

Sen. Joni Ernst, R-Iowa, said that Biden has “utterly failed” to meet the challenges of the Afghanistan withdrawal as well as the spread of omicron, showing his “inability to lead the country” through crises.

“From his disaster in Afghanistan to the out-of-control situation at our southern border, and now his failure to prepare for the omicron variant his own administration warned about, time and again Joe Biden has utterly failed to meet the challenge and has demonstrated to the American people his inability to lead this country through crises, including those of his own making,” said Ernst.

Biden said at the end of August the “consensus opinion” was that when the U.S. withdrew all its troops from Kabul, a Taliban takeover of the country “would not occur.”

However, the administration has been heavily criticized for being caught off guard by the speed of the Taliban takeover and the resulting deadly chaos of the troop withdrawal, as well as leaving thousands of Americans and Afghan allies stranded after vowing that he would not.

“President Biden’s own generals and the intelligence community warned him that the withdrawal from Afghanistan would result in the country rapidly falling to the Taliban. For a president who claims ‘the buck stops with him, he is very slow to actually take responsibility for his mistakes,” the ranking member of the House Foreign Affairs Committee, Rep. Michael McCaul, R-Texas said.

The State Department announced last week that it had evacuated nearly 500 U.S. citizens from Afghanistan, while fewer than a dozen U.S. citizens who want to leave are still stranded there. Those numbers are remarkably higher than the estimates Biden originally gave after U.S. troops had withdrawn on Aug. 31 and the Taliban seized power.

In addition to failing to anticipate the Taliban’s swift takeover of Afghanistan, the Biden administration is now under scrutiny for whether it anticipated the highly contagious omicron spread.

“Most recently, Biden has shifted the responsibility and blame of the spread of COVID-19 to the American people. Given his consistent failure in handling the pandemic, this comes off as desperate. It is also frustrating that as Biden plays the blame game with the American people, he is choosing to not acknowledge the actual origins of COVID-19,” continued McCaul.

Both President Biden and Vice President Kamala Harris have indicated that they were surprised by the severity of the omicron spread, while other administration officials have maintained that this is not the case.

In addition, President Biden on Tuesday blamed the inadequate number of COVID-19 tests on an unforeseeable surge in cases.

“It just happened almost overnight just in the last month. And so, it’s not a failure, but an alarm bell went off. I don’t think anybody anticipated that this was going to be as rapidly spreading as it did,” Biden said when asked if the spread was due to an administration failure.

However, the Centers for Disease Control and Prevention (CDC) director contradicted Biden and Harris’ statements that the administration was had been caught off guard by omicron.

“This is what we have been preparing for,” CDC Director Rochelle Walensky said on Tuesday. “There have been doubling times of this virus in other countries that have had the virus before us in one-and-a-half- to the three-day range. So this is exactly what we anticipated.”

LMAO…typical DemonRAT. It’s not my fault. His nigger Bama was the same way!