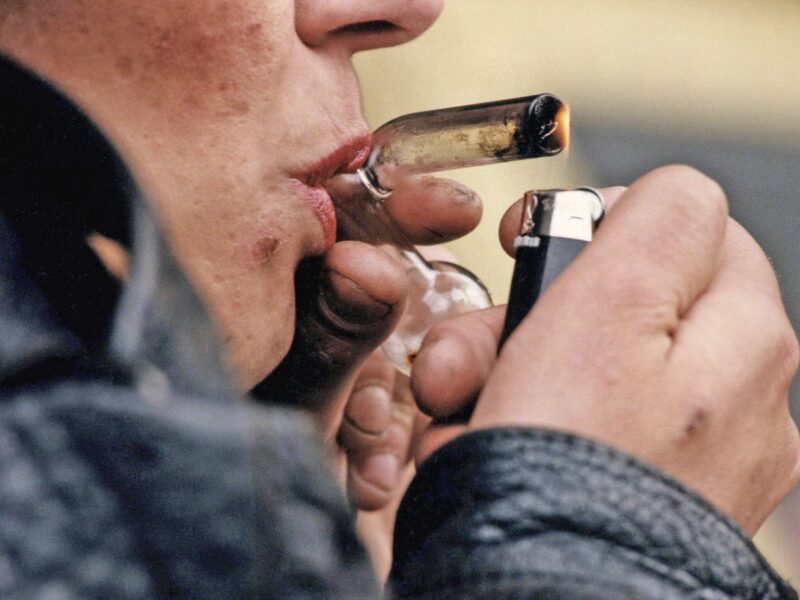 President Joe Biden’s administration is making a controversial move with plans to facilitate drug use.

President Biden’s Health and Human Services department (HHS) is finalizing funding to hand out crack pipes to drug addicts as part of its ‘Harm Reduction Plan.’

The $30 million grant program, which is set to start doling out money in May, will be allocating funds to nonprofits and local governments to supposedly make drug use safer, and to advance ‘racial equity

The grant money will be used to purchase ‘safe smoking kits/supplies.’ A spokesperson for HHS said the kits include pipes used for smoking substances like crack cocaine and crystal methamphetamine, or ‘any illicit substance.’

HHS said that the purpose of the kits is to limit the risk of infection as users usually smoke out of glass pipes which can lead to cuts and sores that frequently become infected with diseases like Hepatitis-C.

Distributing pipes is also aimed at encouraging users to smoke rather than inject themselves with some substances, like meth, as the risk associated with injections is higher.

Applicants for the program get priority if they provide for ‘underserved communities,’ such as African Americans or Native Americans, or LGBTQ people.

The crack-cocaine epidemic which started in the 1980s disproportionately affects the black community.

It is unlawful to sell or distribute drug paraphernalia, including pipes, unless authorized by a state, local, or federal law.

There were an estimated 100,306 drug overdose deaths in the 12-month period ending in April 2021, according to the CDC, a 28.5% increase from the year prior. Three-quarters of those deaths involved opioids, many of which were synthetic opioids, such as methamphetamine or fentanyl.

Cities like San Francisco and Seattle have already been experimenting with crack pipe kit distribution programs, while others places have backed away from these plans. Louisville, Ky. had allowed convenience stores to sell drug kits, but later banned them from doing so.

Meanwhile, the Justice Department (DOJ) indicated Monday it may allow ‘safe injection sites to open up across the U.S. These sites would serve as safe havens where drug users could use heroin and other narcotics freely without risk of arrest in an environment that would be monitored by health professionals.

The DOJ said it was ‘evaluating’ these types of facilities and talking to regulators about the ‘appropriate guardrails.’ Under the Trump administration, the DOJ had prosecutors who adamantly fought against plans to open safe consumption sites.

‘Although we cannot comment on pending litigation, the Department is evaluating supervised consumption sites, including discussions with state and local regulators about appropriate guardrails for such sites, as part of an overall approach to harm reduction and public safety,’ the agency said in a statement Friday.

A divided appeals court last year ruled that safe injection sites would violate a 1980s-era drug law aimed at ‘crackhouses.’  The Supreme Court in October declined to take up the case.

The New York City sites have thus far intervened in more than 110 overdoses among more than 500 users, many of whom are frequent visitors, according to OnPoint NYC, the organization running them.

However, critics argue these sites only encourage drug use and burden the surrounding communities.

‘Is this a cruel joke? Drug overdose deaths are at their highest recorded levels. The Biden administration should focus on stopping traffickers instead of creating more demand for their product,’ Sen. Tom Cotton, R-Ark., wrote on Twitter of the Justice Department’s consideration of the facilities.

No one asked me if this is how I would like my tax dollars spent, but my answer would be a resounding NO. I dare say I’m not the only one that doesn’t want my hard-earned dollars spent on drug paraphernalia and an expensive babysitter to watch someone use drugs.

The 100,306 drug deaths are on Brandon’s head since the flow of drugs across the border has been encouraged since he took office.
The drug cartels are probably paying for this program.

If someone by the name of Joe was in the middle east. He would already have had his head severed off.