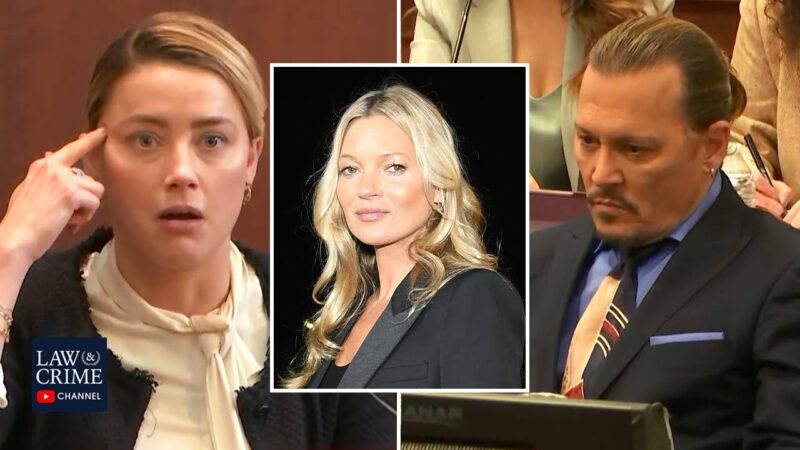 Amber Heard May Have Overplayed Her Hand With Kate Moss Reference

Amber Heard’s dramatic reference to Kate Moss on the stand last week, may bite the actress in the butt.

Heard told jurors May 5 the only time she had ever “landed a blow” was during a fight with Depp over his alleged infidelity in March 2015, when she thought he was about to push her sister down the stairs.

“I don’t hesitate. I don’t wait. I instantly think of Kate Moss and the stairs, and I swung at him,” Heard said, referring to a rumor that Depp had once shoved the supermodel, whom he dated in the 1990s, down a flight of stairs.

Depp’s attorney Ben Chew was visibly giddy, as he turned to his team and did a fist pump. Depp just looked down at the plaintiff’s table and smiled.

Depp is suing Heard for $50 million in Fairfax County Circuit Court in Virginia over a 2018 op-ed she wrote identifying herself as a victim of domestic abuse, which he says ruined his reputation and career.

In a $100-million countersuit, Heard alleges that Depp conspired with his former attorney to defame her by calling her abuse allegations a hoax.

Manhattan-based civil lawyer Roland Acevedo said name-dropping Kate Moss was an obvious misstep that could “blow up in her face.”

“It certainly could open the door to calling in Kate Moss,” said Acevedo.  “It’s considered a tangential issue that usually courts don’t let you bring in but since the defense opened the door and said he did this, they now may be able to call her to prove it never happened. This could blow up in her face.”

Judge Penney Azcarate will decide whether Moss can or will testify. A source close to Depp said he and Moss are close friends, and his legal team may reach out to her to testify during his rebuttal case.

Depp’s team believes Heard’s lapse may also have opened the door for them to bring in evidence of her prior 2009 arrest for allegedly hitting ex-girlfriend Tasya van Ree at the Seattle-Tacoma International Airport. She was charged with misdemeanor domestic violence, but prosecutors declined to move forward with the case.

After her mugshot came out, Heard claimed that she was arrested on a “trumped-up charge” because the cops were misogynistic and homophobic.

The police officer who arrested her “was both a woman and a lesbian activist, who publicly said so after she was publicly disparaged by Ms. Heard,” Depp’s lawyers wrote the suit.