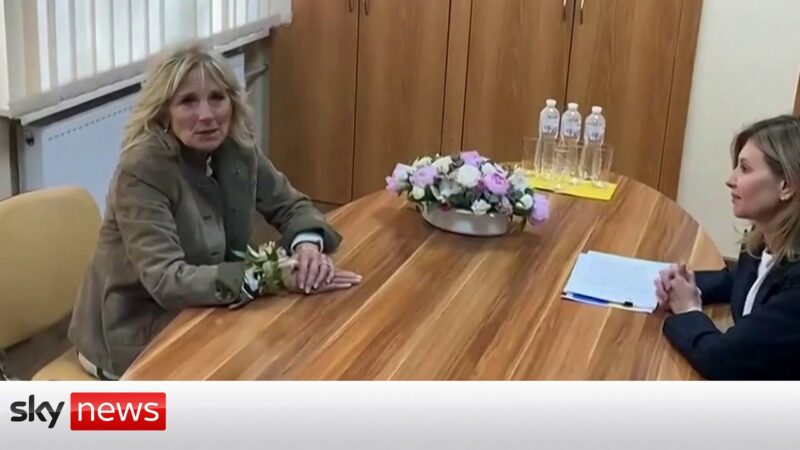 First lady Jill Biden made an unannounced trip to Ukraine Sunday, where she met with Ukraine’s first lady, Olena Zelenska, in a Mother’s Day show of solidarity for women fleeing Russia’s invasion.

Biden met Zelenska at a school in the western city of Uzhhorod.

Zelenska, who has not been seen in public since the invasion began, thanked Biden for “a courageous act.”

“We understand what it takes for the U.S. first lady to come here during a war, where the military actions are taking place every day, where the air raid sirens are happening every day — even today,” she said, speaking through a translator.

“We all feel your support,” she added. “We all feel the leadership of the U.S president. But we would like to note that Mother’s Day is a very symbolic day for us. Because we also feel your love and support during such an important day.”

The two first ladies met privately before they visited a classroom at the school, which had been transformed into temporary housing for Ukrainians who’d fled west.

The first ladies worked on an arts and crafts project with some of the 47 children currently housed at the school in what was called both a recreational and psychological activity to address the trauma they faced.

Biden making the unannounced trip is unusual for a presidential spouse and makes her the latest prominent official to visit Ukraine. The White House previously indicated that Biden would travel to the Slovakia-Ukraine border.