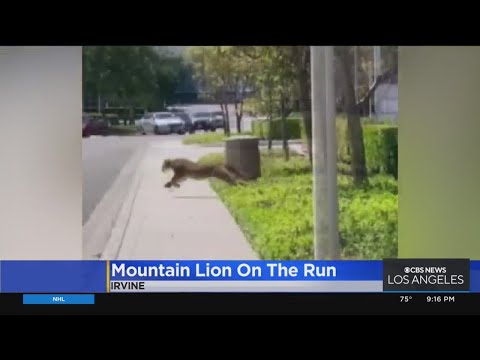 Local police officers along with animal control were called to capture a mountain lion in Irvine California Tuesday when the feline tried to enter a hair salon.

A quick-reacting receptionist at Bishops Salon outside the Sand Canyon Plaza by Waterworks Way and Odyssey closed a glass door on a mountain lion just in time to keep it from entering the store.

“I just heard a commotion outside, and I just looked up, and all of sudden, I just see this lion coming out of nowhere,” employee Rukkus said.

“At first, I thought it was a robbery or maybe a shooting,” employee Claire Leenerts said. “It was very scary. I’m looking over and I just see it slammed right into our glass.”

A veterinarian examined the two-year-old mountain lion, who is reported to be in good health and will be released soon.

“We are not lion, we had a purr-ty scary situation on our paws today,” Irvine Police said on social media. “As our claw-enforcement officers arrived, the lion ran towards the shopping center nearly causing a fur-enzy as it is uncommon for a mountain lion to be seen in Irvine.”

“Thankfully our officers are not scaredy cats and purr-sued the big kitty into a business area,” police added.

The California Department of Fish and Wildlife (CDFW) said there have been an increasing number of interactions between people and mountain lions. The CDFW advises people not to run if they encounter a mountain lion, because doing so may trigger a chase, catch and kill response. Instead, it’s important to face the animal, make noise and look bigger by waving your arms. Squatting could make a person appear to be a four-legged animal to the cougar, which would trigger an aggressive response.