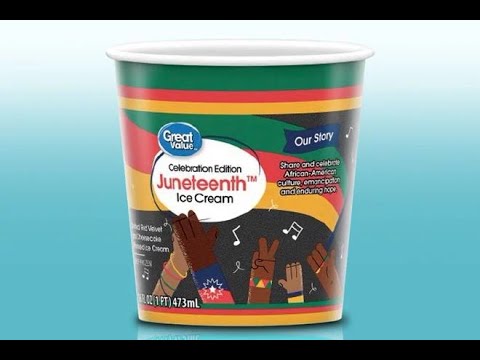 Walmart is apologizing for a new flavor of ice cream they put out called “Juneteenth.” The product sparked a backlash and criticism that the company was trying to profit from the holiday commemorating the end of slavery in the U.S.

Walmart said it is reviewing its product assortment “and will remove items as appropriate.” It added, “Juneteenth holiday marks a celebration of freedom and independence. However, we received feedback that a few items caused concern for some of our customers and we sincerely apologize.”

The swirled red velvet and cheesecake Juneteenth ice cream caused a social media frenzy, with some Twitter users saying the ice cream flavor appeared tone-deaf, given it was sold by a company founded by a White family and run by a White CEO.

“It’s problematic when White-owned brands and companies treat Juneteenth as another commercialized (co-opt) opportunity void of any commitments to the [African-American] community, change or simple understanding of what Juneteenth is,” one Twitter user wrote.

Juneteenth became the nation’s 12th federal holiday in 2021 when President Joe Biden signed a law designating June 19th as the holiday. The holiday is in remembrance of June 19, 1865, when the last enslaved African Americans in Galveston, Texas were finally told that the Civil War had ended and they were free.

It was more than two years after President Lincoln signed the Emancipation Proclamation, that they finally learned that they were free.

Bridge, a company focused on diversity and inclusion in businesses, issued a letter to Walmart executives on May 23 urging the company to pull the product from its shelves. Bridge noted that Juneteenth marks a “very dark and devastating period in American history.”

“Would you launch an ice cream called January 27? The day the world remembers the Holocaust. Or April 7, the day that memorializes the genocide in Rwanda. Of course not,” the letter noted.

The ice cream also placed a “TM” trademark indication next to the word “Juneteenth” on the label, which Bridge indicated was problematic.

“Placing a TM and claiming ownership of the word ‘Juneteenth’ further exacerbates the lack of understanding of laying claim to something that represents so much to an entire population. Juneteenth simply cannot be owned,” the group said.

Oh, you mean all those customers that get butt hurt over almost anything, and can’t wait to cry out like a squeaky wheel? I remember all those customers and they come in all colors and sizes. Especially if they are not awarded participation trophies. I know them well.