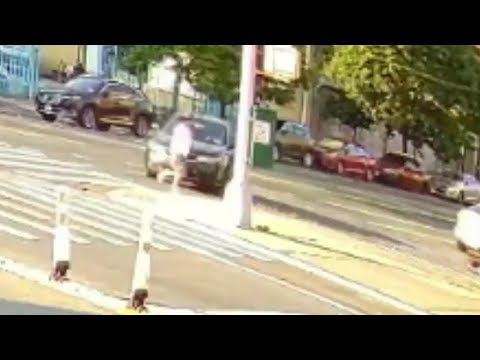 Video Shows Suspects Mow Down Man With Car Then Rob Him

The New York Police Department released a disturbing video Sunday morning that showed a car in the Bronx taking a sharp turn, hitting a man and knocking him into the air, before the occupants robbed him.

Police are now looking for the suspects, who robbed the pedestrian at approximately 6:40 a.m. local time.

The video showed a black car cut a corner so sharply that it appeared to go off the road when it hit the 39-year-old victim, sending him flying into the air. As the victim lay virtually motionless an individual could be seen removing items from his person, and later searching his body, even flipping him over onto his back with another person watching.

From one angle, the same car could be seen parked nearby while the theft was taking place.

Police described three suspects: two who allegedly robbed the victim and one who remained in the car. The victim was in critical condition and receiving treatment at a nearby hospital after emergency workers responded to the scene and took him to the facility.

Amazing, the amount of special humans we are growing now.