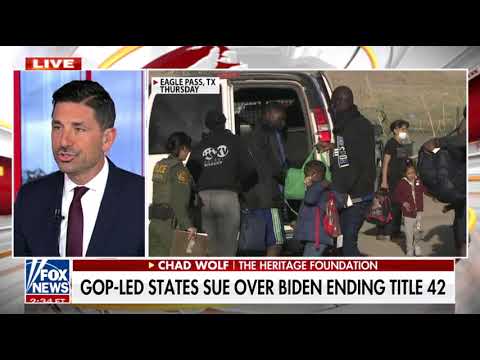 Attorneys general for Arizona, Missouri and Louisiana announced Monday they are suing the Biden administration over the decision to end Title 42, asking for the order to be reinstated.

The Centers for Disease Control and Prevention (CDC) announced Friday that Title 42, the Trump-era policy which allows border authorities to quickly return migrants will end May 23. The group argued that the decision to end the policy violates the Administrative Procedures Act (APA) “as it is arbitrary and capricious, and the Biden Administration did not conduct the statutorily required notice and comment process,” according to a press release.

“Revoking Title 42 will create an unprecedented surge at the southern border and it will overwhelm law enforcement agencies and non-governmental organizations as well,” they argued. “The U.S. Department of Homeland Security, (DHS), estimates ending Title 42 will result in as many as 18,000 migrants per day – which could mean 540,000 migrants in a single month.”

“While it’s difficult to identify President Biden’s most irresponsible move since taking office, rescinding Title 42 is certainly up there,”  Arizona Attorney General Mark Brnovich said in a statement.

“It’s a ridiculously poor decision with a bad intention for border states and American communities across the country. This administration’s reckless pandering to the far Left and complete abdication of its responsibility to public safety cannot be allowed to continue,” Brnovich said.

When Title 42 officially ends, migrants’ claims will be processed under Title 8 which will allow them to await their court dates in the United States. National Border Patrol Council (NPBC) President Brandon Judd said that, in practice, the order allows for these migrants to be released because facilities don’t have the capacity for the surges.

“If the Biden Administration won’t take proactive steps to secure our border and protect our citizenry, we certainly will,” Missouri Attorney General Eric Schmitt said in a statement.

“Based on recent statistics, approximately 56 out of every 1,000 unlawful aliens who enter the United States end up residing in Missouri … Missouri is also a destination state and hub for human-trafficking crimes within the United States, due to its situation at the confluence of several major interstate highways.  Such crimes disproportionately afflict illegal aliens, and these crimes (and other crimes committed by illegal aliens) impose irreparable law-enforcement and criminal-justice costs on Missouri,” the lawsuit states.

The Biden administration has said it’s making preparations to address an expected migrant influx, arguing that Title 8 will result in the expulsion of migrants who lack lawful claims to be in the country. A DHS official said Friday that the administration is “concerned about the fact that, as is the case with any anticipated policy change, smugglers will spread misinformation to take advantage of vulnerable migrants.”