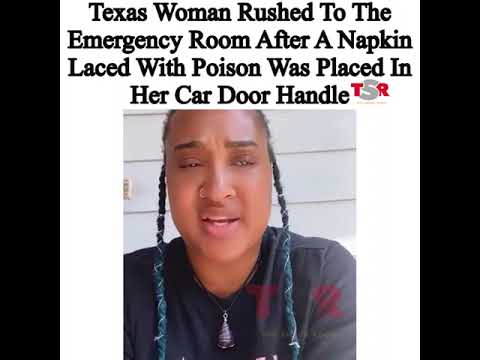 A Houston woman said she landed in the hospital after touching a napkin that was suspiciously placed on her car door.

Erin Mims and her husband were at a Houston restaurant celebrating her birthday on Tuesday afternoon and when they went to get back into their car, a napkin had been placed on the door.

Mims said that she threw the napkin away and didn’t think much of it.

“I just threw it out,” Mims said. “I opened the door with the tips of my fingers. I asked my husband, did you put a napkin in the door? And he said no.”

Mims said she went back into the restaurant and washed her hands before getting back into her car, but then her fingers began to tingle, and she rapidly began experiencing other symptoms as well.

When she arrived at the hospital, doctors ran urine samples, blood tests, as well as a CAT scan, and said that her vitals were all over the place.

“The doctor came in, and told me it wasn’t enough in my system to determine what it was, but said it was acute poisoning from an unknown substance,” Mims said.

The doctors said the incident sounded like a failed kidnapping attempt.

The Houston Police Department agrees, saying this is the first case of its kind the department has seen.

“The probability is that you would have to have a lot more than just a casual exposure,” Winter said. “In her video, her symptoms match hundreds of different poisons. It is possible. I’ve learned over my 40 years, that anything is possible when it comes to the human body.”