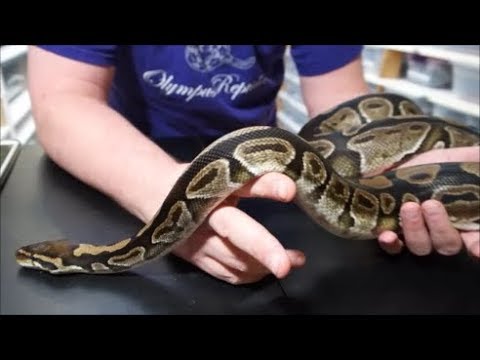 Workers serving up burgers and shakes in a Sonic fast-food kitchen made a fast exit when they discovered an intruder lurking behind the deep fryer.

Employees of the Sonic drive-in in Brunswick, Ga were huddled up in the parking lot when police Lt. Matthew Wilson arrived to investigate Saturday. When employees called 911 they had described the intruder as being brown with diamonds on its back.

“When I saw it, I could tell it was just a ball python and not a rattlesnake,” Wilson said.

Not only did officer Wilson remove the giant, non-venomous snake, but he found it a new home with a friend who has a large terrarium and likes snakes.

Wilson said the python probably slithered into the Sonic’s kitchen through an open back door, finding a comfy spot for its cold-blooded body behind the hot fryer.

Though it’s not known where the snake came from, Wilson said it had likely been a pet that was turned loose by its owner.

Eammon Leonard, an invasive species biologist with the Georgia Department of Natural Resources, said snakes are often an impulse buy and owners find themselves having second thoughts as their pets grow larger than they had expected.

“It could be somebody just didn’t think through the consequences of a large snake as a pet,” Leonard said. “Some people have regrets later on and just release things. It is definitely irresponsible.”