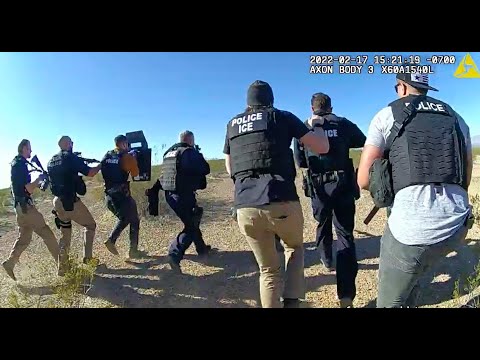 On Feb. 17, police were searching for 30-year-old Oscar Alcantara, in connection with an incident in which he brandished a weapon. Authorities caught up to Alcantara in St. George.

When police pulled over the vehicle Alcantara was traveling in, a woman exited the car and warned police that Alcantara was still in the car with her baby and was armed. Alcantara then jumped into the driver’s seat and sped off, prompting police to give chase.

After Alcantara crossed the Arizona border, police tried to get Alcantara to surrender.

“Put the child down on the ground, we will not pursue you!” a police officer is heard shouting at Alcantara in the video footage.

Alcantara grabbed the infant, ran into some brush then pointed the weapon at the baby.

“Oscar stop! We don’t want to hurt you!” an officer could be heard screaming.

As police tried to talk Alcantara down, snipers moved into position.

Authorities say that’s when Alcantara pointed the gun at them.

“The gun is pointed right at us! Gun pointed at us!” one officer could be heard yelling.

Approximately one hour after the incident began a sniper shot and killed Alcantara with a single shot.

The shooting remains under investigation.