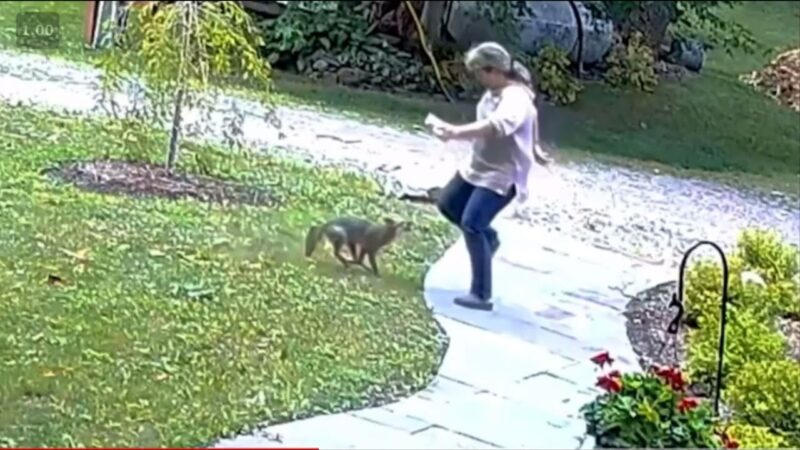 A rabid fox viciously attacked a woman in her yard, and surveillance footage captured the struggle as she fought for her life.

The unprovoked attack took place in Ithaca, New York, in July. In the video, the fox can be seen approaching the woman from behind while she talks on the phone and bites her on the leg. The woman immediately kicks the animal off, but the fox relentlessly continues its attack.

The video then shows the woman kicking the fox several times, but the animal continues its assault. As the woman tries to kick the fox, it bites down on her leg again and doesn’t let go.

She then uses her hands to detach the animal from her body and throw it across the lawn. The fox relentlessly continues its advances through a hail of kicks and bites down on the woman’s hand and remains attached in spite of all her efforts to shake it off.

A neighbor eventually appears on camera and can be seen with a long stick in his hand as he rushes to help the woman.  The video ends with the fox fleeing, likely scared off by the neighbor.

The fox attempted to attack someone else nearby but was killed during that incident. The body was tested at the veterinary lab at Cornell University, where it was determined that the fox was rabid.