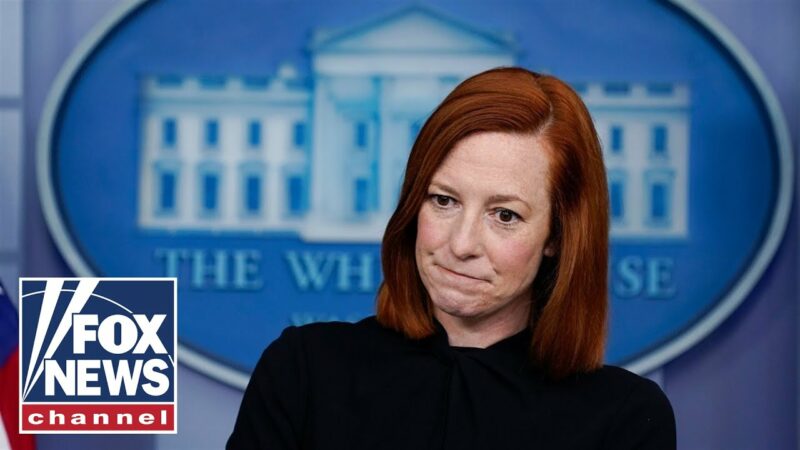 White House press secretary Jen Psaki doubled down on White House correspondent Peter Doocy’s claim that the border is open and posing a threat of spreading the COVID-19 virus during Thursday’s press briefing.

Doocy pointed out there were approximately 15,000 migrants camped out under the international bridge in Del Rio, Texas on Saturday, however, considering the number of migrants Psaki claimed had been expelled or released, Doocy stated that the number drops to much less than 5,000.

“Say there’s 5,000 that are still left, where’s everybody else?” Doocy asks. Psaki did not answer directly and said that she could verify the number with the Department of Homeland Security.

Doocy asked Psaki whether the administration not requiring mandatory vaccination for immigrants was contributing to the spread of the coronavirus here in the U.S.

“We understand basically most of these people that are going into removal proceedings are being put on either buses from Del Rio to El Paso and Laredo or being flown to Tucson with no covid testing unless they show symptoms. How is that helping anybody stop the spread?” Doocy pressed.

“We have a protocol and processes in place as it relates to covid in terms of testing and quarantining and also vaccines are provided for a range of migrants,” Psaki responded. “What is happening now… is that if individuals cannot be expelled under Title 42 they are placed in removal proceedings.”

Psaki said that means some migrants are transported to ICE detainment facilities or given a notice to appear in court.

“But why should somebody say, in Laredo Texas or El Paso or Tucson, Arizona have to have their chance of catching covid go up because hundreds of miles away there is an open border?” Doocy inquired.

“Well, there certainly is not an open border,” Psaki insisted. “We are continuing to employ our immigration proceedings and processes and restrictions at the border and that includes the implementation of enforcing Title 42,” she said.
Doocy responded “You say the border’s not open but we’re told by our teams on the ground you guys are releasing pretty much all family units, couples where the woman says that she is pregnant or single women who say that they are pregnant and that nobody actually has to take a pregnancy test unless they want to but…”

Psaki cut Doocy off mid-sentence and redirected,“Are you suggesting that you don’t believe when women say they’re pregnant? Is that a big issue we think, at the border?”

“I’m not in charge of keeping the border secure,” Doocy pointed out. “You guys are.”

“Do you think pregnant women are posing a big threat to the border?” Psaki asked.

“You tell me,” Doocy fired back.

Psaki responded by saying that she doesn’t think women at the border claiming to be pregnant is a big issue then redirected her comments back to earlier points she’d made.

Doocy once again asks whether the border is open, Psaki responded by saying that he “knows the answer,” reiterating that the administration is using Title 42 to expel migrants thus discouraging migrants to come.

An estimated 15,000 thousand migrants congregated under the Del Rio International bridge, and thousands of them have been released, unvaccinated to areas throughout the U.S., according to The Associated Press on Wednesday.

Migrants have been released on a “very, very large scale,” the majority of whom were issued a notice to appear in court, according to the report. Migrants were transported to various towns such as El Paso and Laredo for additional processing, according to the publication.

Amid the surge in migrants, Republican Texas Gov. Greg Abbott announced Tuesday the state would enlist the National Guard and Texas Department of Public Safety to park vehicles along the border in the Del Rio area to create a “steel barrier.”