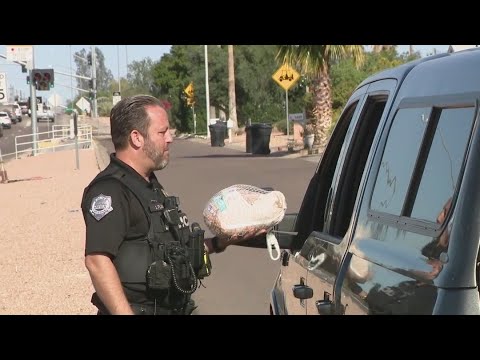 Police In Mesa Arizona Give Unsuspecting Motorists The Bird

In honor of Thanksgiving 2021, law enforcement has been surprising drivers with turkeys instead of tickets.

The Mesa Police Department in Mesa, Arizona, spread a little thanks-giving this year by giving turkeys to people who thought they might be getting a ticket.

“When you made your turn, you made a wide turn. You’re supposed to stay in your lane,” Officer Jason Flam of the Mesa Police Department told a motorist.

Instead of coming back from his police cruiser with a ticket, Flam offered the motorist a turkey.

Flam said that some stops were emotional, bringing one man to tears.

“…I don’t think they can afford the turkey, so it worked out really good,” said Flam.

One driver thanked Flam for the offer but said she had already bought a Thanksgiving turkey and requested that he “pass it on.”

Another person was on his way to pick up a turkey when Flam pulled him over.

“In fact, I was on my way to Costco to pick up some fixings, so this saved me a few bucks,” said Mike Ormerod.

Here is one happy driver that got a turkey instead of a ticket. @lindawfox10 got a chance to talk to him. Watch the story later today on @FOX10Phoenix @MesaPD pic.twitter.com/cWVy4GHIOx

Mesa police are one of many U.S. police departments which give “turkeys not tickets.”

The Turkeys not Tickets program was proposed by a Mesa police commander in order to connect with the community.

One turkey left to hand out and one happy driver that got a turkey instead of a ticket during the turkeys for tickets event of the @MesaPD 2021. pic.twitter.com/ZV6gLAW7nF

“I think it’s a great idea. I was telling the officer, in the past few years, police officers, in general, have gotten a bad rap, and I think it’s important they get recognized for putting it out there every day,” Ormerod said.