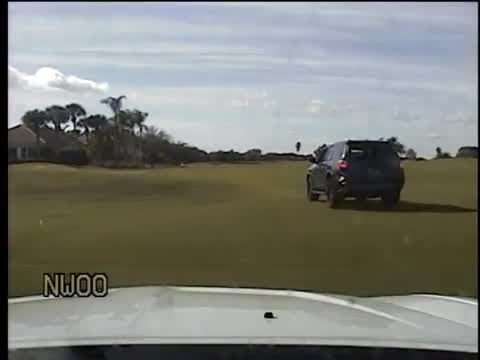 A Range Rover led police on a chase through Cypress Lakes Golf Course in Texas on Tuesday and the incident was caught on camera by golfers.

Authorities initiated a traffic stop but Grey Martinez, 20, chose to lead police on a pursuit of the vehicle.

“We were warming up before the round and the last thing we expected to see is after we hit a drive out and admiring the distance is a range rover comes flying over the top of the hill,” said Philip Morgan, the golfer who filmed the chase.

“Then, I saw a police car and it was like being in Grand Theft Auto,” Morgan said.

Martinez eventually lost control of the vehicle and crashed in the Fairfield subdivision. He and his passenger, 19-year-old Trevor Passmore, fled the scene on foot.

Police apprehended Martinez, who dropped an AK-47 when he fled from the crashed Range Roger. Martinez spat on a deputy as he was being taken into custody, authorities said. Passmore was later found in the swimming pool at his residence and taken into custody.

“I’m just glad nobody got hurt because there were a lot of people on the golf course so that could have ended in a terrible way,” Morgan said.