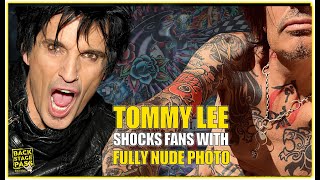 In typical Tommy Lee fashion, the drummer addressed the full-frontal nude photo that he recently posted to social media……in front of a live audience.

At Mötley Crüe’s show in San Antonio, Texas, on Sunday, the 59-year-old drummer addressed the crowd about the picture, saying that it was taken during a “motherf***ing bender.” He then challenged audience members to flash their own “junk.”

“A couple of weeks ago, we had like a two-week break off the tour and I went on a motherf***ing bender, bro,” Lee explained to the crowd. “A bender. I got f***ing sideways as f*** and got naked and posted pictures of my d***.”

He pointed to one particular guy wearing a pink shirt and said, “He’s ready to pull his d*** out. Show the whole world that motherf***ing hotdog.” When the man pointed to the woman next to him, Lee shouted, “The wife says no? Divorce!”

Earlier this month, Lee posted a naked photo of himself seated on a bathroom floor — on Instagram. The photo was left up for several hours before being taken down. Lee also posted the image to Twitter where it remains up weeks later.

Lee has a history of exhibitionism and is well known for the videos he made with his first wife Pamela Anderson were stolen and released in the 1990s, a story recently retold in Hulu’s Pam & Tommy. Sebastian Stan played Lee, opposite Lily James’s Pam, and it also included a scene in which the rock star had a conversation with his p****, a role voiced by Jason Mantzoukas.