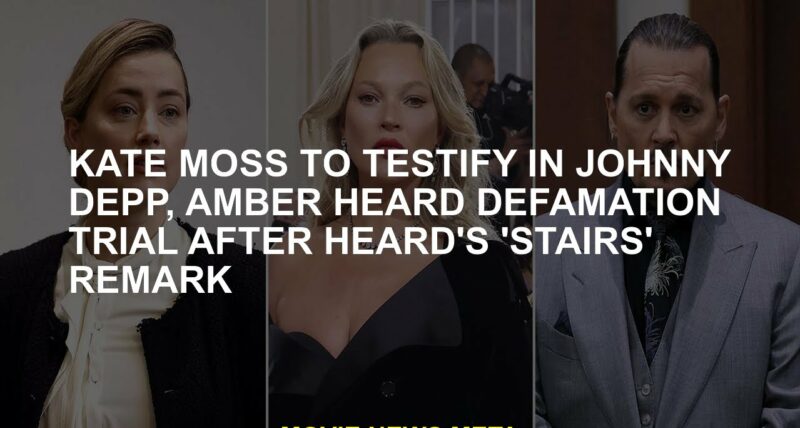 Moss, 48, is set to testify via video link on Wednesday in the Fairfax, Virginia, courtroom.

Depp’s lawyers were practically giddy a few weeks back when Heard, 36, brought up Moss during her testimony.

Legal experts explained at the time that Heard mentioning Moss opened the door for Depp’s team to dispel a rumor that he pushed the supermodel down a flight of stairs when the two dated in the 1990s.

Heard brought up Moss while testifying on May 5, recounting a March 2015 fight in which she punched Depp in the face out of fear he was going to shove her sister Whitney down a staircase.

Heard said she “instantly” thought about “Kate Moss and the stairs” — prompting Depp’s lawyer Ben Chew to turn and fist-pump.

Moss told Vanity Fair in a 2012 profile, “There’s nobody that’s ever really been able to take care of me. Johnny did for a bit.

“I believed what he said. Like if I said, ‘What do I do?’ he’d tell me. And that’s what I missed when I left. I really lost that gauge of somebody I could trust.”

Her testimony will come on the third day of the six-week trial, which is set to wrap up Friday.

Depp, 58, is suing ex-wife Heard for $50 million over a 2018 Washington Post op-ed where she called herself a “public figure representing domestic abuse.” Though she did not name the actor, he claims it defamed him, ruining his career and causing him to lose millions in revenue.

Heard countersued Depp for $100 million, saying he defamed her in 2020 when he and his lawyers made statements to the press that she had fabricated her allegations of abuse.