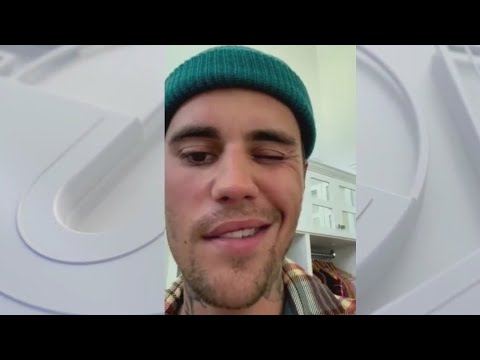 After canceling several shows on his Justice World Tour, Justin Bieber shared with fans that he had been diagnosed with Ramsay Hunt Syndrome and that half of his face had been paralyzed as a result.

Initial reports said the singer was suffering from a “non-COVID related illness” and, in an Instagram post on Tuesday, the singer said that his “sickness is getting worse,” adding that he postponed the show due to “doctor’s orders.” But, a few days later, Bieber returned to Instagram to share his diagnosis.

“I wanted to update you guys on what’s been going on,” he said in a video message posted to his Instagram on Friday. “Obviously, as you can probably see from my face, I have this syndrome called Ramsay Hunt syndrome and it is from this virus that attacks the nerve in my ear and my facial nerves and has caused my face to have paralysis.” As Bieber speaks in the video, it’s clear that one side of his face isn’t moving. “As you can see, this eye is not blinking. I can’t smile with this side of my face, this nostril will not move, so there is full paralysis in this side of my face.”

The singer added that he was “not capable” of performing, and promised fans that he was doing everything he could to recover. “I’ll be using this time to rest and relax and get back to 100% so that I can do what I was born to do,” he said. “I’m gonna get better and I’m doing all these facial exercises to get my face back to normal, and it will go back to normal, it’s just time.”  Bieber asked fans to pray for him because it was “getting progressively harder to eat” due to his paralysis.

Ramsay Hunt syndrome is a rare neurological disorder caused by the varicella-zoster virus (which causes chickenpox and shingles). The virus can be dormant for years and suddenly reawaken, causing inflamed nerves in the inner ear and face. Most people diagnosed with Ramsay Hunt syndrome can make a full recovery, but it can take anywhere from weeks to months. The illness can also cause intense vertigo and loss of hearing, which, in some rare cases, become permanent.

As for what this recovery timeline means for the Justice Tour, future concert postponements are likely.