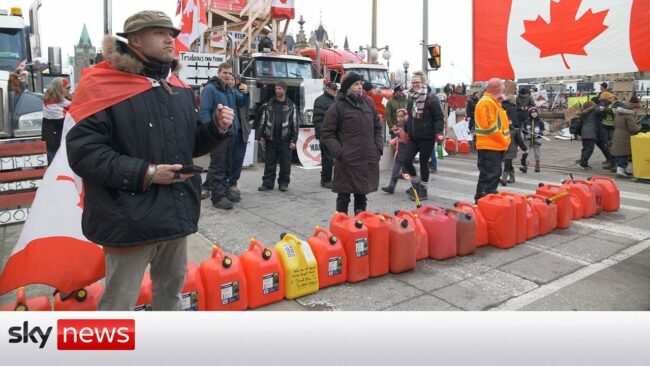 Juliette Kayyem, a lecturer at the Harvard Kennedy School and an official in former President Barack Obama’s Department of Homeland Security, called for truck drivers protesting Canada’s COVID-19 policies to be arrested on Thursday.

“Trust me, I will not run out of ways to make this hurt: cancel their insurance; suspend their driver’s licenses; prohibit any future regulatory certification for truckers, etc,” she said. “Have we learned nothing? These things fester when there are no consequences.”

“Earlier today, I tweeted something that has been used by others to suggest I was promoting vigilantism,” Kayyem said late Thursday. “I was not. People have the freedom to protest. Governments have the responsibility to protect public safety. That was what I intended to say.”

When Republican Arkansas Sen. Tom Cotton called for an “overwhelming display of force” to dispel violent riots during the summer of 2020, Kayyem accused him of gunning for a job as Defense Secretary and said his statement was “ambition masked as a tweet.”

She also called former President Donald Trump’s attempt to deploy the military to dispel protests in June 2020 “ahistorical” and “dangerous,” and she said, “when Trump defenders invoke military use in LA Riots, it exposes how little they know about #homelandsecurity.”

The trucker convoy protests in Canada began in late January and have grown substantially, blocking major transportation routes, including the Ambassador Bridge which connects Canada to Detroit.

LOL…there’s nothing more dangerous then the niggeRAT party. They have come unglued, lead by a drooling moron, named blow hole killer Joe!