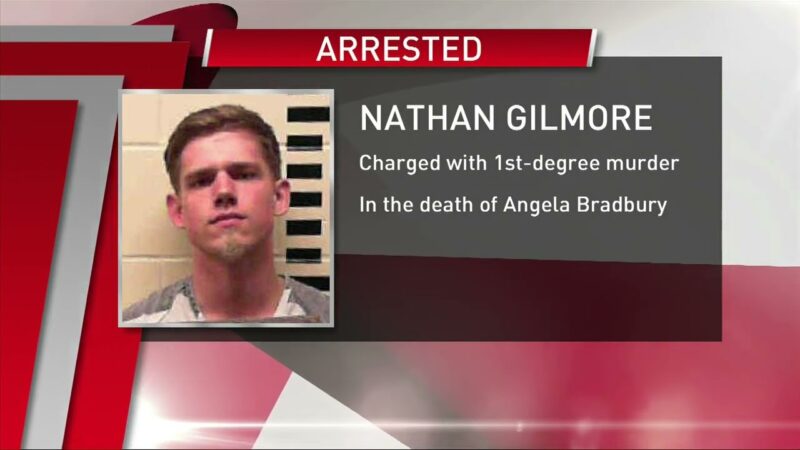 An Iowa man was arrested for first-degree murder for killing a woman in April 2021 and then placing her head on a stick in a park.

Nathan James Gilmore, 23, was taken into custody on Friday in connection to the death of 29-year-old Angela Nicole Bradbury.

Detectives said that Gilmore referenced the murder in a social media message and drew a “satanic goat’s head in the shape of a pentagram” with numbers that referenced the savage murder, according to a criminal complaint.

Gilmore told police that gave a ride to a woman matching Bradbury’s description from Cerro Gordon County Jail on April 6, 2021. He initially said that he dropped her off at a home in Mason City, but later changed his story and said he dropped her off five blocks from the jail.

A teenager discovered the skull at Greenbelt River Trail Park on July 12, 2021, roughly three months after the murder.

Bradbury was reported missing by her family in February of this year. They said they hadn’t heard from her since April 2021. The Iowa State Medical Examiner’s Office was able to positively identify Bradbury’s skull using DNA and dental records.

Human remains belonging to Bradbury were discovered at the trail in April 2022, at that time a medical examiner determined that the cause of death was a homicide.

Gilmore told police that after he left Bradbury on April 6, 2021, he went to work and then returned home that evening. Detectives said in the complaint that GPS coordinates placed him in the park.

“GPS records obtained from Gilmore’s Facebook account showed that on the evening of April 6, 2021, Gilmore’s Facebook account was active in an area northwest of Greenbelt River Trail Park at approximately 7:21 p.m. and active in an area southeast of the Greenbelt River Trail Park at approximately 8:37 pm,” the complaint said.

Detectives searched Gilmore’s home on Friday and found a drawing that “depicted a satanic goat’s head in the shape of a pentagram with what appeared to be blood spatters drawn on it.”

Numbers were written on the drawing referencing Bradbury’s death. Detectives believe that “04-06” coincided with April 6, the day Bradbury was murdered. The numbers, “43.3, -92.8,” are abbreviated GPS coordinates of the park.