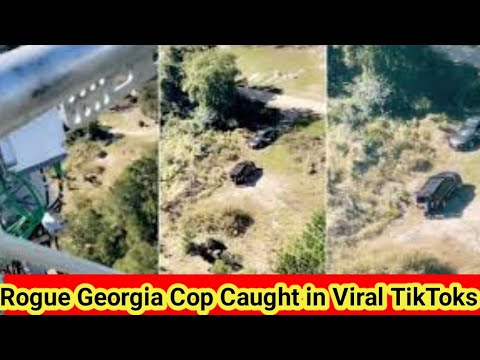 Georgia Cop Caught On Camera With His Pants Down

A Georgia lawman apparently thought no one was watching when he drove his squad car to an off-road spot in Millen, walked around to the back of the vehicle, and engaged in a sexual encounter while in uniform.

However, someone in a nearby telecommunications tower could see him and began filming the encounter then uploaded the video to TikTok last week where it quickly garnered more than 15 million views.

“Police caught on cam!!!” one video was captioned, along with the hashtags #towerclimbers and #dirtydeeds.

Now the officer, identified as Millen Police Officer Larry “Benjamin” Thompson, has quit the force and a record of past misconduct has come to light.

Satellite maps from White Oak Road in Millen, a town of about 3,500 people, show the same tower, nearby cemetery, and patches of dirt and bushes that can be seen in the TikTok videos. The map also shows a school across the street.

Millen Police Chief Dwayne Herrington said Thompson quit before he had the opportunity to meet with him. Georgia state records indicate that Thompson had worked for the department on and off since 2015.

According to Millen City Council meeting minutes, Thompson was involved in a car crash while on the job in November 2019, that killed 76-year-old Lewis Jenkins when he t-boned Jenkins’ car while racing to a call at 86 miles per hour.

Documents also show that while Thompson was working for the Millen fire department in 2017, he accidentally discharged his gun, shooting a colleague in the arm.

Thompson claimed the gun malfunctioned while he was cleaning it but an internal investigation determined that the weapon had no malfunctions. “This is not an excuse to be accepted; only a reflection after the fact,” the criminal investigative division wrote in its report. “Though it is referred to as an ‘accidental discharge,’ essentially it is a ‘negligent discharge.’”

In 2020, a woman who had been in a relationship with Thompson contacted Millen Police to report that he was harassing her. Thompson admitted to running her tags to find her new address but claimed he simply wanted to return some old items to her, according to a case summary. He was suspended for two days.