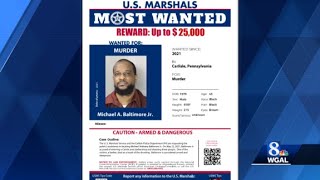 A man featured on the TLC series “90 Day Fiance” is on the run after being named as a suspect in the deadly shooting of a Pennsylvania barber shop owner.

According to a press release from U.S. Marshals Service, Michael Anthony Baltimore, 39, was added to the 15 Most Wanted list. The reward for information leading up to the capture of Baltimore was increased to $25,000 after it was previously set at $7,000. The Bureau of Alcohol, Tobacco, Firearms, and Explosives has also offered a reward of up to $10,000, and Cumberland County Crime Stoppers has offered $2,000. Baltimore is considered “armed and dangerous,” and authorities advise that he “should not be approached.”

Baltimore entered the Pennsylvania barber shop on Saturday, May 22, 2021, at approximately 7:30 p.m. and shot Cook several times, and then opened fire on Anthony White, who previously worked at the shop. Cook died at the scene while White survived his injuries, according to the Carlisle Police Department at the time.

Baltimore and Cook were both featured on episodes of 90 Day Fiancé: Happily Ever After? in June 2019. Cook was the man who told Martson, 36, that Smith had sex with another woman in the shop’s bathroom. Cook later took to social media to defend his decision to tell Martson the truth.

“Everybody talking this rat and snitching s–t! says a lot about who you are as a person,” Cook wrote. “Please let me know what [motherf–ker] don’t want to know the person they married is cheating on them?”

“We was looking out for Ashley cause she was trying [to] marry someone who wasn’t ready to get married! Jay needed some time and more experience with being in America before he was ready to settle down!” Cook continued, noting Smith, 24, made it his “business” by doing the deed at his place of business.

Since then, Martson and Smith have divorced.

Anyone who has information on Baltimore’s location should call the United States Marshals Service at 1-877-WANTED2 (926-8332). Anonymous tips may also be submitted via the U.S. Marshals Tip App, and tips may be sent to Cumberland County Crime Stoppers at [email protected] or by calling (855)-628-8477.