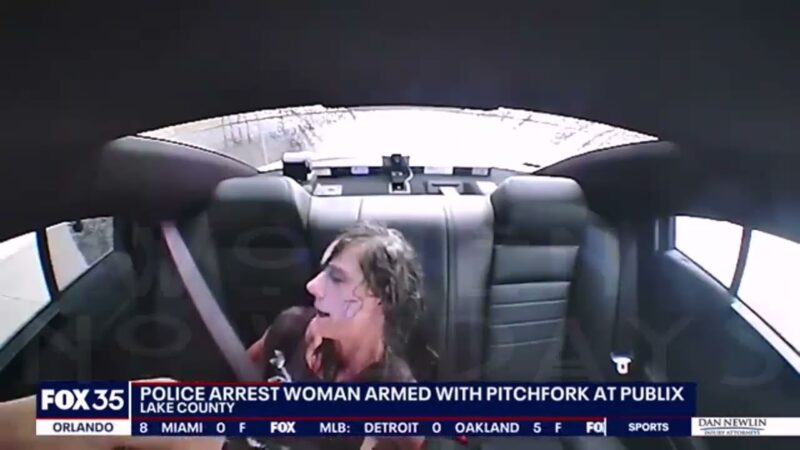 A Florida woman was arrested after standing outside a Publix grocery store in the pouring rain brandishing a pitchfork and black whip.

Dashboard video footage released by the Florida Highway Patrol shows a trooper pulling to the Publix on North Hancock Road in Clermont and coming to a stop just Lisa Ann Sloan, 56, walks out in front of the vehicle.

The trooper exited the vehicle got out of his car, arrested her, and returned with her in handcuffs. She can be heard saying, “I forgive you for saying that.”

As the trooper loads her into the vehicle, she asks, “Don’t you feel real bad?”

“You seem like a good man, you’re trying to do your job, because this woman’s mentally ill, right,” she says. The trooper asks, “Are you OK?” She says, “I’m great.” When he asks if she’s taken anything today, she says “yes.”

She tells the trooper she forgives him, then shouts let them come, and Baker Act me, a reference to The Florida Mental Health Act of 1971, or Baker Act, which allows the involuntary institutionalization and assessment of individuals who appear to be mentally impaired and a danger to themselves or others.

The store’s owner said that Slone had been trying to sell teddy bears behind the store before she started running around with a whip and pitchfork, which she used to stab a mini-van.

According to a booking report from the Lake County Sheriff’s Office, she was charged with aggravated assault with a deadly weapon, a third-degree felony. She was booked into the Lake County Jail.