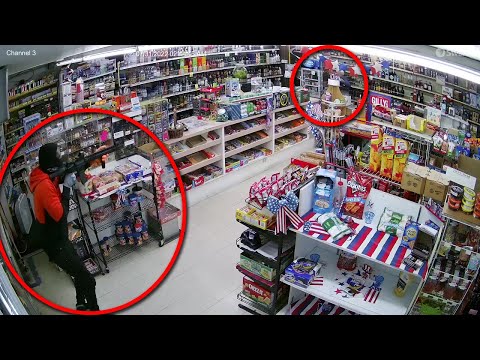 The video shows the masked male suspect entering the store with an AR-15-style rifle shortly before 3 a.m. and pointing it directly at the 80-year-old store owner. The assailant told the owner to put his “hands in the air,” several times but the owner ignored him.

Instead, the owner took his shotgun from behind the counter area and fired a single shot at the suspect, hitting him in the arm. The suspect started screaming and ran out of the store, yelling, “He shot my arm off! He shot my arm off!”

Surveillance video from outside the store showed the first and second suspects getting into a car, with two additional suspects. All four suspects were later located at a hospital in Southern California, where one was being treated for a gunshot wound.

The other three suspects were found in a stolen BMW SUV with several stolen firearms. Justin Johnson, 22, Jamar Williams, 27, and Davon Broadus, 24, were booked into the Robert Presley Detention Center on charges of robbery and conspiracy.

The primary suspect remains in the hospital in critical but stable condition. He will be taken to Riverside County jail upon discharge. “In this case, a lawfully armed member of our community prevented a violent crime and ensured their own safety, while being confronted with multiple armed suspects,” Riverside County Sheriff’s Office said in a statement.